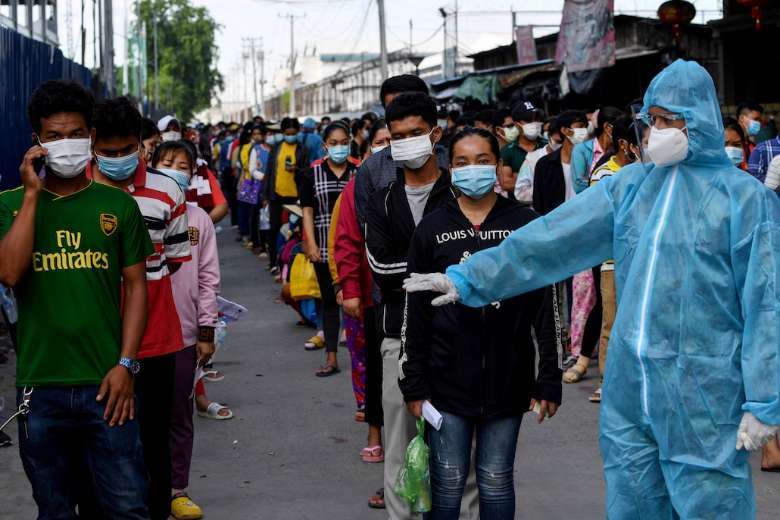 Prime Minister Hun Sen has pledged all Cambodians will be vaccinated against the Covid-19 virus “at all costs.”

However, one of the world’s longest-serving leaders also said the right to life was his government’s top priority and not the right to democracy.

“My priority is to ensure the well-being and the lives of the people,” Hun Sen said.

“The right to life is the top priority that shall be granted to the people, not the right to freedom of expression or democracy … Cambodian law is created to protect human life. What I have been doing is protecting my people’s lives.”

Hun Sen was speaking at the handover ceremony of the first batch of 332,000 doses of Japan-aided AstraZeneca vaccines that arrived at Phnom Penh International Airport. Japan is expected to donate a total of one million vaccines.

“With the above assistance, Cambodia will have a total of 18 million vaccines to inoculate people aged 18 and above as well as children aged 12 to 17,” he said.

When the children are vaccinated, schools from secondary level and above will reopen

Additionally, the United States has promised to provide more than one million doses of Johnson & Johnson vaccine.

“We are working closely with the government, the COVAX mechanism, the World Health Organization and UNICEF to deliver the vaccines in the near future,” the US embassy said in a statement.

“When the children are vaccinated, schools from secondary level and above will reopen,” Hun Sen told the government-friendly Fresh News, adding he would ensure all his grandchildren are also vaccinated. Hun Sen, who has governed with absolute authority since Cambodia returned to one-party rule in 2018, has said he accepts “being called a dictator” because he will be admired for saving lives. This has upset civil society groups and human rights activists.

Cambodia has imposed harsh legal penalties and restrictions to curb the pandemic including nightly police raids in the capital, targeting people who flout the laws. Institutions and public venues ranging from schools and government offices to bars and gyms remain closed.

Authorities are hailing the success of the vaccination rollout, the second fastest among 10 Southeast Asian countries.

Cambodia is committed to acquiring 20 million Covid-19 vaccines to inoculate 10 million people out of a total population of 16.5 million. More than 6.4 million have been fully vaccinated or have received their first jab.

Cambodia wants to achieve herd immunity by the end of the year.

However, case loads remain stubbornly high at almost 900 a day with a total 71,244 confirmed cases and 1,222 deaths. There are fears of another wave emanating from Cambodia’s neighbors Vietnam and Thailand, who have been ravaged by the Delta variant.