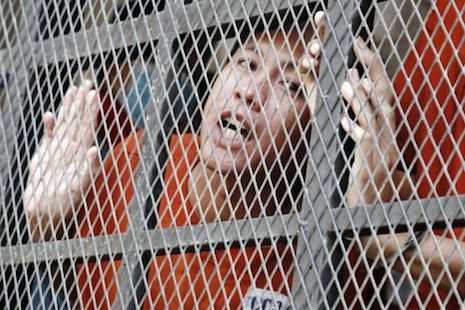 While the smoke has long cleared on January’s violent garment strikes, for many of the 23 workers and unionists arrested and tried on charges widely considered to be baseless, the ordeal is far from over.

Nine months after security forces used deadly violence to end strikes over the minimum wage, many of the men arrested, convicted and released with suspended prison sentences months later find themselves broke and out of a job.

With new wage negotiations back on the agenda — and unions threatening more large-scale demonstrations if demands aren’t met — some former detainees claim they have been excluded from the garment sector altogether.

Twenty-two-year-old Lon San was beaten and arrested on January 2. He says he and his wife, both employees of Sky 9 factory, were only watching the strike action.

During the months that he languished in prison, San claims that neither his co-workers nor his bosses attempted to contact him, and he was quietly dismissed from the factory.

Having applied for close to 20 jobs since his release from prison, San says he has been flatly rejected from all of them.

“Whenever I see phone contacts hanging outside factories saying they need workers I call the contact to ask for a job. But when I tell them my name, it seems like they know that I used to be in prison and reply to me that they don’t need workers,” he said.

“Those factories, including my old factory, rejected my application because they know I am one of the 23 people who was arrested and detained in prison,” he said. “I can’t think of other reasons than that I have a criminal record for why I have not been selected for a job. I think factories might have blacklisted me.”

Since his imprisonment, San says his financial troubles have sunk to new depths.

“I have become a housewife: I stay at home to cook and look after the children, but my wife works to support the family. It is really shameful for me,” he said.

With the income generated by his wife’s factory job — US$130 a month — now used to support the couple and San’s 80-year-old grandmother, daily life has become a constant struggle.

“My rent is $35, plus $15 for utilities, so we don’t save much. We don’t have enough for spending on food, medicine and travel when only my wife is working,” he said. “I have no idea how to make a living now.”

Chea Samnang, an administrative manager at Sky 9 factory, claimed yesterday San’s dismissal had nothing to do with his arrest, explaining it was factory policy to dismiss workers who had been absent for more than six days “without good reason”.

“He lost communication with us for too long … so we deleted his name from our factory. However, he was a temporary worker at the time, he was not a contract worker yet,” he said, adding that Sky 9 would consider employing San in the future.

But San’s story is echoed by a number of the workers imprisoned in January, who say their demands for $60 more a month – the current minimum wage is $100 — have left them with nothing.

Ros Sophorn, 25, said yesterday that his applications to more than 20 factories since June have also proved futile.

“I’ve applied for jobs with garment factories, but they say my name was rejected because I was detained in the prison and other factories would not accept men because they are afraid they will start protests,” he said. “I think my name was blacklisted, that’s why no factory accepts me.”

Joel Preston, a consultant with the Community Legal Education Center (CLEC), said it was “more than possible” that those arrested had been formally blacklisted from factories because of their involvement in the strike, adding that the high-profile nature of the case may have made these workers a target.

“There was not a drop of evidence to suggest they’re guilty of the crimes [for which they were convicted].… It was just bad luck; it could have happened to anyone,” he said.

Wu Menghuor, administrative manager at the Tai Yang factory in Kandal province, said he had no specific policy against employing those arrested in January but, he admitted, the former detainees would likely be discriminated against simply because they were men.

“Our factory is not the kind to care much about criminal records, but to tell you the truth, even in my factory, we rarely employ men because they are strong and they also think strong,” he said. “Men like to protest, so we don’t want many men to work here.”

Other garment workers arrested in January said a lack of money had forced them back to their home provinces, where chances of finding factory work are even slimmer.

But even for those not in the garment sector, life out of prison has been a struggle.

Sokun Sambath Piseth, 32, was working for an NGO when he was arrested. After prison, Piseth landed a short-term job, but has since been unable to find work.

“I can guess that because I have a criminal record and am still charged by the court, no one will accept me,” he said.

Piseth has become a central figure among the 23, sharing donations he receives among the group.

“Sometimes I get $50 or $60 and sometimes I get up to $120 per month from an Australian friend, so I share it with the workers, giving them $5 or $10 each depending on who is in need,” he said. “They still keep in contact with me because I help support them.”

But the lack of jobs has also created fractures in the once-united group.

A number of former detainees told the Post that broken promises of jobs made by union leader Vorn Pov — arrested alongside them in January — had led to division.

“I always followed him everywhere, hoping to get a job as he promised, but later on he went quiet, so now I’ve stopped following him as I have no money to pay for gasoline or food,” San said.

Pov, president of the Independent Democratic of Informal Economic Association (IDEA), the most high-profile of those detained, admitted that “most” of the 23 are still unemployed but said he could only help them so much.

“I used to tell them that I will find jobs for them after we get out of prison. I did not make promises, I just told them.…I am still looking for jobs for them,” he said. “I can’t abandon them because we used to suffer with each other, and I still appeal to any generous people to help them, but it is difficult because they don’t want to help us every time.”

While Pov is still a regular at the country’s protests, many of the others say that if the current calls for a $177 monthly minimum wage are taken to the streets, they will be reluctant to join.

“I am scared that those unions who are involved with demanding a higher wage will abandon me again if I have a problem, so I will not join the protests anymore,” San said.

Piseth said that while he would not join another protest, he has a dream of creating his own NGO to help his former cellmates and those still struggling to survive on current wages.

“I can’t keep my eyes open and see all the workers and poor people have their rights violated,” he said.

Original Story: Hard times for ‘the 23’