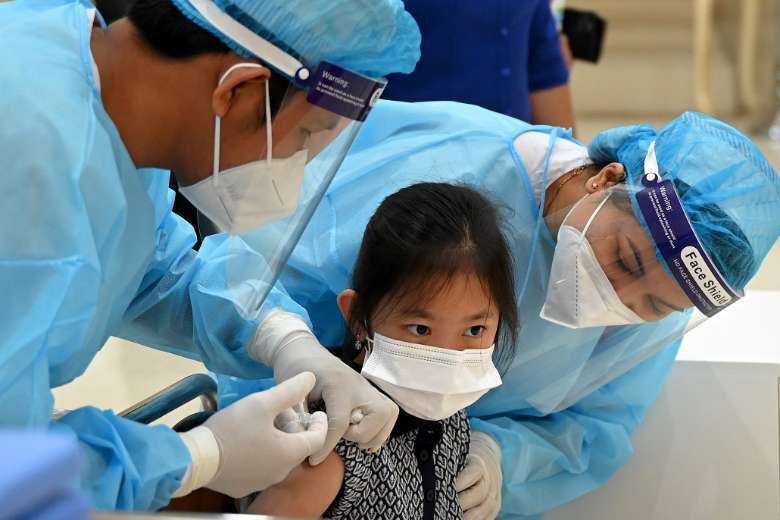 A granddaughter of Cambodian Prime Minister Hun Sen receives a dose of the Sinovac vaccine at the Peace Palace in Phnom Penh on Sept. 17 as the country begins vaccinating children aged 6-11. (Photo: AFP)

Cambodia has begun vaccinating children aged 6-11 against Covid-19 as China promises a further nine million doses of its Sinopharm and Sinovac vaccines to improve access for people seeking a third booster shot.

The Southeast Asian country is also seeking donations promised by Australia for a further 2.3 million doses and will undertake a study on the possibility of vaccinating children as young as three.

Hopes are growing that foreign tourists could return in the last quarter to boost the damaged economy.

“Vaccine is not a problem,” Prime Minister Hun Sen said. “We have at least nine million doses of vaccine on hand for the third dose. So far, the booster doses have been administered to more than 800,000 people.”

He said the kingdom would also study the need for a fourth dose vaccination against the disease and if the decision is made to proceed then his government would seek further vaccines with the support of the private sector.

“This depends on the evolution of the Covid-19 virus and the production of vaccines,” Hun Sen told journalists.

“We need to monitor this issue in global practice with the effectiveness of vaccines, and we must also adhere to recommendations from the World Health Organization.

“If a fourth dose is recommended, the government is responsible for purchasing vaccine and providing to people for free, but I also want to see private companies share the burden with the government.”

Cambodia's number of confirmed Covid-19 cases has soared above 100,000, nearly all recorded since the February 20 event when two women breached quarantine and went out partying. All 2,109 deaths have been recorded since then.

As the health system reached capacity and “red-lined,” Hun Sen delegated power to district and provincial authorities enabling them to enforce health restrictions based on a need-by-need basis and this has resulted in a patchwork of measures deployed across the country.

They range from provinces being shut down and borders closed, bans on alcohol sales and the closure of public businesses to curfews and snap lockdowns of buildings and city blocks, designed to keep the pandemic, in particular the Delta variant, in check.

Ten days ago, a 9pm curfew was suddenly imposed in Siem Reap, home to the fabled temple ruins of Angkor Wat, and on the following day locals were given just a few hours’ notice that the entire province was to be locked down with no one allowed in or out.

However, the vaccination rollout has been swift with infection rates relatively low compared with neighboring Thailand and Vietnam. The rollout was extended to children about a month ago and schools are starting to reopen.

Daily confirmed Covid-19 caseloads remain steady at between 600 and 700, with 72 percent of the population vaccinated, and the health ministry is now targeting 91 percent of the country’s 16 million people to achieve herd immunity.

That has also raised hopes that Cambodia will attempt to reopen its tourist sector amid speculation of a reduction in mandatory quarantining from two weeks to one.

The government has also said it hoped to see tourists return in the last quarter. Their absence has dealt a severe loss to the economy, with as many six million people having lost their jobs due to the pandemic.

There are many countries that are open without quarantine and Cambodia is in a position to do the same. It really needs to happen soon

As a travel destination Cambodia has always suffered from a lack of long-haul flights capable of delivering tourists directly from North America, Europe and Australia.

Its reliance on transit connections in neighboring Thailand, Vietnam and Malaysia has been compromised by a severe outbreak of the pandemic. In Laos, the government has locked down capital Vientiane until the end of the month.

Cambodia’s quick rollout of its vaccination program has been credited with limiting the impact of the pandemic. Nick Ray, author of the Lonely Planet guides to Cambodia and elsewhere, said the country was in a position to reopen to foreign tourists.

“They are in a position to be among the first to fully reopen to tourism. Neighboring countries are running sandboxes but here they can open the entire country,” he said.

“But the mandatory quarantine is a deal breaker. Nobody wants it. There are many countries that are open without quarantine and Cambodia is in a position to do the same. It really needs to happen soon.”