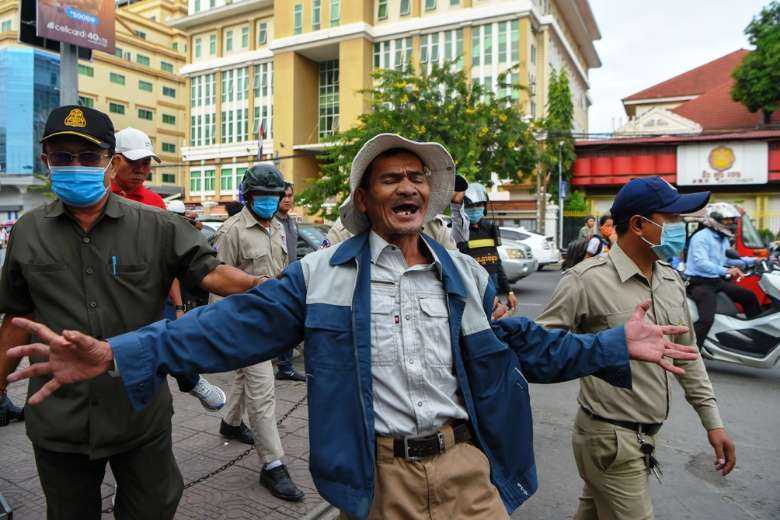 A Cambodian activist gestures as police escort him away from a municipal court in Phnom Penh in November 2020 during a mass trial against more than 100 opposition members and activists charged with conspiracy to commit treason. (Photo: AFP)

A municipal court in Phnom Penh has dropped arrest warrants and charges of conspiracy to commit treason against Yim Sinorn and nine others from the court-dissolved Cambodia National Rescue Party (CNRP).

This follows an intervention by Prime Minister Hun Sen, who referred a clemency plea from Yim Sinorn, the South Korea-based former youth president of the CNRP, and former party members to the justice ministry.

Yim Sinorn had written in a letter to Hun Sen that he and the other former members of CNRP had led a non-violent movement and never supported the “-Repatriation Movement in November 2019 as stated in the charges against them.

Yim Sinorn further said he had never supported former opposition leader Sam Rainsy, who had incited hatred against the monarchy after he called on armed forces to launch a coup.

“For the above reasons, we were attacked by extremists of the court-dissolved CNRP. We were accused of joining the movement, which led Cambodian authorities to issue arrest warrants against us,” he said in the letter published by Fresh News.

He also noted that the prime minister had recently intervened to drop charges against political analyst and professor Seng Sary, which was a wise move that was supported by the national and international public.

Violent protests followed, leading to a widespread crackdown on demonstrations, the independent press and non-governmental organizations

Seng Sary, who lives in exile in Thailand, was charged in absentia after he outlined six hypothetical scenarios for the formation of a coalition government that included the CNRP. But the charges were dropped after Hun Sen re-examined the analysis.

Hun Sen decided Seng Sary’s outline was “reasonable and acceptable” and urged the analyst to carry on his work.

The CNRP was dissolved after its leaders refused to accept the results of the 2013 election after it came tantalizingly close to winning the popular vote and resorted to making unsubstantiated charges that the poll was rigged.

Violent protests followed, leading to a widespread crackdown on demonstrations, the independent press and non-governmental organizations.

The ruling Cambodian People's Party (CPP) won every seat contested at the elections in 2018 and the CNRP with Sam Rainsy at the helm continued to protest from abroad, culminating in two failed and well-publicized bids to return and lead a popular uprising aimed at ousting Hun Sen.

Former CNRP leader Kem Sokha is still under arrest and is facing a trial for treason. The high court has also banned 118 of the party’s senior leaders from politics for five years.