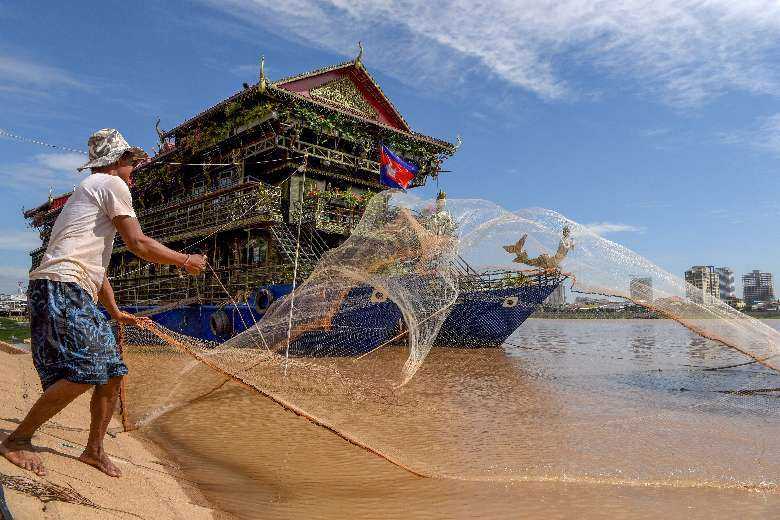 A fisherman throws his fishing net into the Mekong River in Phnom Penh, Cambodia. (Photo: AFP)

Cambodian police have detained 130 people on suspicion of illegal fishing following a crackdown ordered by Prime Minister Hun Sen due to warnings about depleting national resources.

The warnings from the Royal Academy of Cambodia said that unchecked illegal fishing was depleting national resources. About 65 million people living in the Lower Mekong Basin rely on fishing as their major source of protein and have complained bitterly about depleting fish stocks, which has been blamed on water shortages and illegal fishing.

Illegal fishing along with land grabbing are constant sources of irritation as well as key issues as the long-ruling Cambodian People's Party (CPP) gears up for the June 5 elections in 1,652 communes — clusters of three to 30 villages — facing a challenge from some 15 political parties in June.

About 200 villagers are involved in a land dispute over more than 400 hectares of land with businessman Heng Huy in the southern province of Koh Kong and have sought the intervention of Interior Minister Sar Kheng for a quick resolution of the issue.

The villagers claim Huy encroached on their land in 2007, destroyed their rice farms and other crops and forced them to accept compensation of US$25-50 for each family.

The request came as local authorities announced they will evict 300 families in the northern province of Preah Vihear after they encroached and squatted on state land.

“These are real local election issues that matter all the more when the commune elections, the equivalent of local district elections, come around once every five years”

Phnom Tbeng Pi commune chief Ghet Yan said some media and members of the public had criticized the evictions but had failed to realize that these families were from another province and had ignored eviction notices on at least three occasions.

“These are real local election issues that matter all the more when the commune elections, the equivalent of local district elections, come around once every five years,” said one analyst, who declined to be named. “There will be more of this over the next two months.”

Meanwhile, Agriculture Ministry Secretary of State Nao Thuok, who is heading the task force on illegal fishing, told the Khmer Times that 130 suspects had been arrested along the Tonle Sap — a major tributary of the Mekong River — and were being interrogated.

“While we carry out the operations, we are also educating the villagers against getting involved in illegal fishing and using equipment such as electrocuting batteries, fishing nets with tiny mesh, and poisonous chemical products,” he said.

He also said a joint task force consisting of more than 200 men and women, mainly police and military officers, and 20 speedboats had been deployed for the operations.