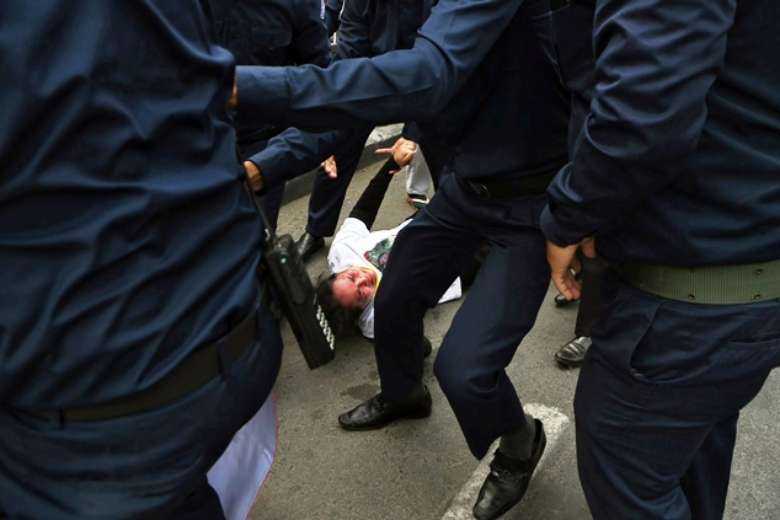 A relative of a jailed Cambodian opposition member clashes with security forces during a protest in front of Phnom Penh Municipal Court on March 17. (Photo: AFP)

A court has convicted 21 politicians and supporters of the opposition Cambodia National Rescue Party (CNRP) to 5-10 years behind bars for incitement and conspiracy.

The March 17 verdict at Phnom Penh Municipal Court followed years of arrests and trials, which began with the dissolution of the CNRP by the courts in late 2017 that ensured the long-ruling Cambodian People’s Party (CPP) won every seat contested at national elections in mid-2018.

Among those sentenced to 10 years were former CNRP leaders Sam Rainsy, Eng Chai Eang and Mu Sochua. They were among seven people, currently abroad, who were convicted in absentia.

Others were jailed for five years and some had their terms partially suspended by Judge Ros Piseth to three years and eight months. As the verdicts were read out, a group of supporters clashed with security officials outside the court.

“The mass trial and convictions of political opponents on baseless charges is a witch hunt that discredits both the Cambodian government and the country’s courts,” said Phil Robertson, deputy Asia director at Human Rights Watch.

“Foreign governments, the United Nations and donors should call out this attack on the political opposition and Cambodia’s remaining vestiges of democracy.”

He said the charges referenced several issues, including the formation of the overseas opposition Cambodia National Rescue Movement (CNRM) in 2018, and social media comments criticizing the government.

Hundreds more have been arrested over the past 20 months and Robertson said the latest verdicts were indicative “of what is expected to be further mass trials in the coming months.”

Verdicts of another two mass trials are yet to be announced. Nine senior leaders were previously convicted for attacking the state and sentenced to at least 20 years each in prison.

The latest case was tied to Sam Rainsy’s bid to return to Cambodia in late 2019 and stage a popular protest which prosecutors argued was aimed at toppling the government of Prime Minister Hun Sen.

They also claimed that the CNRM was responsible for causing the withdrawal of trade perks by the EU under its Everything But Arms (EBA) trade preferences in 2020.

The EU said the move would affect about one fifth of goods exported under EBA, or US$1.09 billion worth of Cambodia’s current exports to Europe, and followed the deterioration in democratic standards in this country.

“Cambodia’s politicized courts have facilitated Prime Minister Hun Sen’s effort to destroy the last remnants of democratic freedoms and civil and political rights in the country,” Robertson said. “Concerned governments should do all they can to reverse this assault on the Cambodian people.”