With international support, the country plans to be free of land mines by 2025 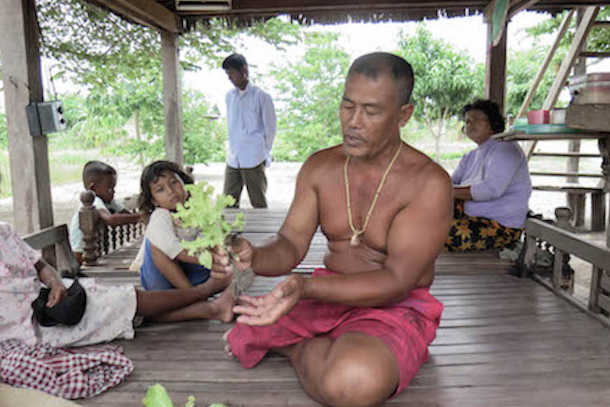 Land mine victim Srey Sovath grows lettuce and rice for sale on his farm in Rattanak Mondol, Cambodia, in this 2015 file photo. (Photo: Abby Seiff)

Cambodia will bolster its demining force by 2,000 men and women and deploy a broad strategy to clear the country of all land mines and unexploded ordnance by 2025 with the backing of the United Nations Development Programme (UNDP).

Australia, New Zealand, South Korea, Switzerland and the United States are backing the effort with extra funds to help train and kit out 2,000 soldiers from the Royal Cambodian Armed Forces.

Just under half of the contaminated land — 1,893 square kilometers — has been cleared of explosive remnants of war since deminers were first deployed in 1994, clearing land for agriculture and dramatically reducing casualty rates.

Some 4,320 people were killed or wounded by explosions in 1996 and that fell to just 77 casualties by 2019. A further 38 victims were reported for the first six months of this year. Curious children scavenging for scrap metal are often among the victims.

The UNDP's resident representative in Cambodia, Nick Beresford, said he was confident the remaining 1,970 square kilometers of land would be cleared by 2025.

However, previous deadlines have been missed, particularly in 2010 when a border dispute erupted with Thailand over the ancient temple of Preah Vihear. The dispute was taken to the international courts and Bangkok lost, but that was after more unexploded ordnance, including cluster bombs, was unleashed.

A 2010 target was revised to 2020 but Beresford said geography was always a potential problem, particularly with sloping land. Clearance work must be done with deminers on their hands and knees, crawling up steep slopes and wearing full protective gear. “This does, of course, slow the work down,” he said.

South Korea recently announced an additional US$10 million and Australia a further $20 million to help fund the Cambodian Mine Action and Victims Assistance Authority over the next five years.

Analysts also said a sense of urgency was creeping into resolving the land mine issue and clearing more land for agriculture needed to boost an economy already suffering from the partial withdrawal of European Union trade preferences, a long-running drought and the Covid-19 pandemic.

Cambodia has emerged relatively unscathed from Covid-19 with just 241 confirmed cases, 200 recoveries and no deaths, according to the Cambodian health ministry.

But tourism, a pillar of the economy, has effectively stopped. The tourism ministry says more than 3,000 tourism-based businesses have closed with more than 50,000 jobs lost.

Overseas workers have come back home with few prospects and the government is advising them to avoid Phnom Penh and the provincial cities and return to their villages and work the land.