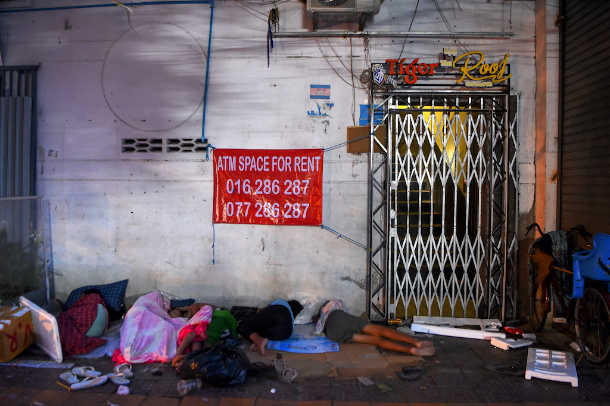 Homeless people sleep on a sidewalk under an advertising sign for rental space in Phnom Penh on Aug. 7. Cambodia's economy has been hit by Covid-19 and the EU's suspension of trade preferences. (Photo: AFP)

Cambodia has allocated a budget of US$1.2 billion to bolster its economy, which is struggling to cope with the impact of the Covid-19 pandemic and the withdrawal of some trade preferences by the European Union.

Meas Sok Sensan, spokesperson of the Ministry of Economy and Finance, told online news portal Fresh News that the partial suspension of preferences under the Everything But Arms (EBA) trade policy did not mean Cambodia would lose export markets in Europe.

“Europe is still Cambodia's exporting destination. The EBA partial withdrawal means some Cambodian goods are no longer on the tax exemption list anymore,” he said.

The suspension came into force today and the government says it will hit the garment and footwear industries, traveling products and cane sugar, costing business about $100 million.

It was imposed in response to Cambodia’s human rights record in the aftermath of the 2018 election, which the main opposition party was banned from contesting.

Further details were not available but Meas Sok Sensan said the allocation would also be used to help Cambodia to cope with Covid-19, which ground international tourism — a pillar of the economy — to a halt.

Cambodia has emerged relatively unscathed from the Covid-19 pandemic, confirming 268 cases and no deaths with 220 recovered. Almost all cases were discovered in people arriving on the few flights still coming into the country.

That prompted the government to suspend flights from Indonesia and Malaysia. The Philippines was added to the list on Aug. 10. It has also imposed strict testing on arrival and demands a medical certificate, health insurance and a $2,000 deposit to cover any potential costs.

However, concerns remain. Medical sources said one group of six Chinese nationals recently arrived and tested positive. They were retested the following day and all six tested negative, which one source said was “unlikely.”

Their whereabouts were unknown amid speculation Chinese from the People's Republic — a major source of investment in Cambodia — were receiving special treatment when entering the country.

Thirteen passengers among 119 who arrived on Aug. 9 from the Philippines tested positive. Two were Chinese, the government said, adding that an American returning from the United States through South Korea tested positive on Aug. 10.

Remaining passengers are being monitored after entering a 14-day mandatory quarantine.

“The $1.2 billion will be a welcome shot in the arm for the economy,” one observer said. “The government has its borders pretty much under control, but there’s always the fear of a Covid-19 cluster outbreak, which could change everything.”