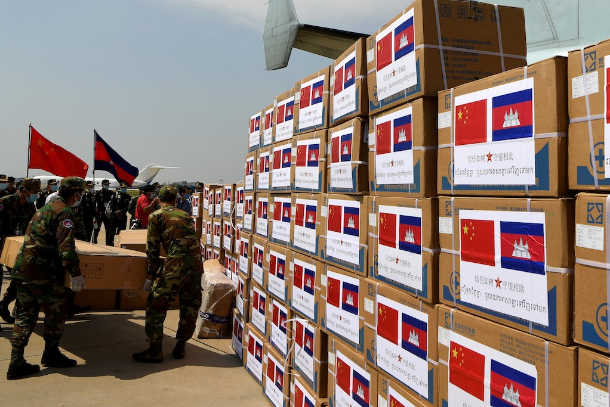 Cambodian soldiers carry aid at Phnom Penh International Airport on April 25 including medical equipment from China to be used to combat the spread of the coronavirus. (Photo: Tang Chhin Sothy/AFP)

Cambodia's government has been using the coronavirus pandemic as cover to make arbitrary arrests of opposition political leaders and its critics, says a US-based human rights organization.

The government has detained at least 30 people for spreading “fake news” since the start of the outbreak in the country in January, New York-based Human Rights Watch (HRW) said on April 29. Initially reluctant to respond to the coronavirus threat, Cambodia’s long-serving Prime Minister Hun Sen is now using the pandemic as cover to crack down on his perceived enemies, the rights group said.The government "should immediately and unconditionally drop the charges against all those accused of crimes in violation of their rights to freedom of expression and association," HRW said in a statement.Phil Robertson, HRW's deputy Asia director, said Hun Sen is tightening his grip on power and throwing political opposition figures and critics in jail while the world is distracted by Covid-19.Among those arrested, 12 are linked to the dissolved Cambodian National Rescue Party (CNRP). They were accused of spreading fake news and other offenses, the group said.In November 2017, a Cambodian court banned the opposition party after it was accused of plotting to overthrow Hun Sen's government.HRW said 14 people remain in pre-trial detention on “baseless charges” including incitement, conspiracy and spreading false information.Though Covid-19 cases have held steady at 122 with no deaths for more than two weeks, Cambodia’s single-party legislature approved a martial law on April 10, authorizing a state of emergency to contain the spread of the pandemic.The new law empowers authorities to enforce unlimited surveillance of telecommunications and to monitor the press and social media. The government can also restrict freedom of movement and assembly, seize private property and enforce quarantines.Chhin Malin, a Justice Ministry spokesman, told media that the government isn’t targeting the opposition party or dissidents. “We will implement the law against those who breach the law,” he said.

Hun Sen is conflating criticism of the government’s epidemic response with threats to political stability and public order.Since 2017, his ruling Cambodian People’s Party has used similar justification to systematically silence independent media organizations and crush opposition party members and government critics.Critics also accuse him of ignoring the Covid-19 situation in his concern not to jeopardize Cambodia’s close ties with China.When the coronavirus emerged in China in December, Hun Sen initially refused to acknowledge the threat. As regional countries restricted travel to China, he visited Chinese President Xi Jinping in Beijing on Feb. 5.While neighboring Thailand and Vietnam mobilized serious efforts to contain the pandemic, Cambodia conducted its largest-ever joint military exercise with China.Hun Sen also insisted that businesses, including garment factories, the lifeblood of the country’s economy, should be operational. “The safest places are working places,” he said.Thousands of garment workers are transported each day to poorly ventilated factories where social distancing is impossible and viral spread is inevitable.At least 16 percent of Cambodia’s GDP and 80 percent of export earnings come from the garment industry.Hun Sen lobbied Beijing to resume material supplies to the factories, even during the lockdown in China.Cambodia was also the first Southeast Asian nation to get medical aid from China, on March 23, despite reporting just 87 cases and zero deaths at the time.