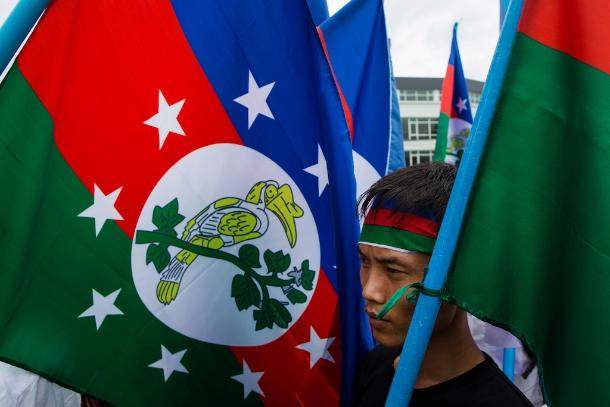 A man holds the ethnic Chin flag during a protest asking for an end to conflict in Chin and Rakhine states in Yangon on July 13. Fighting between the Myanmar military and the Arakan Army intensified last December. (Photo: Sai Aung Main/AFP)

Relatives and lawmakers are deeply concerned about the safety of an ethnic Chin lawmaker who has been detained by Rakhine rebels in Myanmar.

Hawi Tin, an upper house MP for the ruling National League for Democracy (NLD) in Paletwa constituency, was detained by the Arakan Army along with nine others while they were traveling on boats from Paletwa in Chin state to Kyauktaw township in Rakhine state on Nov. 3.

One of five Indian nationals who were working on an infrastructure project in Chin and detained with the lawmaker has reportedly died.

The other Indians were released by the Arakan Army on Nov. 4 but Hawi Tin remains in custody.

Shay Ray Shu Maung, a Catholic and upper house MP for the NLD in Kayah state, said the MP’s detention has raised concerns among lawmakers who are calling for release. But lawmakers from parliament’s upper and lower houses have yet to raise the issue in parliamentary sessions.

“As he is a lawmaker and representing the people, we are seeking his early release,” Shu Maung told ucanews.

“I am worried about my husband’s safety. I want him to be released as soon as possible,” she was quoted as saying by Frontier magazine.

The Arakan Army said it will continue to interrogate Hawi Tin as he is accused of working with Myanmar’s military.

“He secretly recruits and works with ethnic Khumi youth to gather information about the Arakan Army to share with the Tatmadaw,” Arakan Army spokesman Khine Thuka told Myanmar Now, a Yangon-based media group, on Nov. 4.

The group also accused the MP of instigating ethnic and religious hostility among the Khumi and Rakhine tribes.

Myanmar government officials are reportedly negotiating the release of the lawmaker.

The Arakan Army is a largely Buddhist militia fighting for greater autonomy from the national government for a so-called indigenous "ethnic Rakhine" in the state.