Calls for probe into arrest and mistreatment of youths 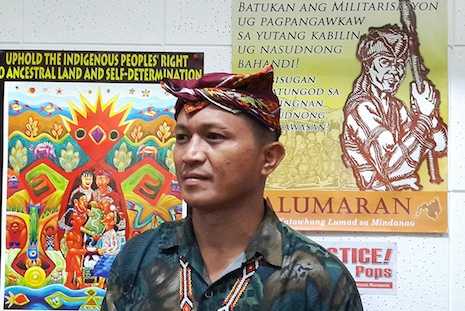 The Philippine military and indigenous peoples organizations are to investigate the alleged arrest and maltreatment of four tribal children on the southern island of Mindanao on Sunday.

"We will investigate this, and if proven that soldiers did it, we will not hesitate to file charges against the erring military unit," said Pya Malayao, spokesman for the National Alliance of Indigenous People's in the Philippines.

Dulphing Ogan, secretary general of the Kalumaran alliance of tribal groups in Mindanao, said they will also look into the allegation and raise the issue with the government’s Commission on Human Rights.

On Sunday, soldiers allegedly arrested four boys from the Matigsalog tribe, aged between 13 and 18, in the village of Ngan in Compostela Valley province.

They were among a number of civilians who fled their neighborhood two days earlier because of local military operations against communist rebels.

The boys were detained as they were returnin home with food donated by the Jesuit-run Ateneo de Davao University for villagers who were building a village school.

"The soldiers stripped me naked," said Dondon, 15. He said they were blindfolded and their hands tied.

Obet, 17, said one soldier put a machete to his throat.

"They kept asking us about the location of the rebels and even accused us of being rebel sympathizers,” said Obeth’s brother, Mike.

He said the soldiers threatened to kill all four of them if they refused to tell them where the rebels were.

“They said they will chop my head off,” Mike’s 13-year old brother, Eping, said.

Ogan says harassment of Mindanao's tribal communities has become rampant since 2008 when the government formed "investment defense forces," a composite unit of police and soldiers, to protect mining activities in the province from communist rebels and opponents.

A military spokesman expressed alarm at the allegations.

Lt Col Elmer Aterado, commander of the army's 25th Infantry Battalion in the area, said the reported incident will be investigated and that the military is "open for investigation".

Matigsalog tribal leader Datu Matunao said, "How can we trust [the military] if they keep on doing these things to us and to our children?"

On October 4, some 1,800 tribal people from the villages of Ngan and Mangayon fled their homes because of military operations against the rebels.

Bello Tindasan, spokesperson of the Compostela Farmers Association, said more villagers will be forced to leave their homes because of the growing number of soldiers in villages.

Tindasan, who is assisting the displaced tribespeople, said military detachments have been set up in civilian communities in many parts of Compostela Valley province.

At least 11 big mining corporations operate 15 mines in the province.