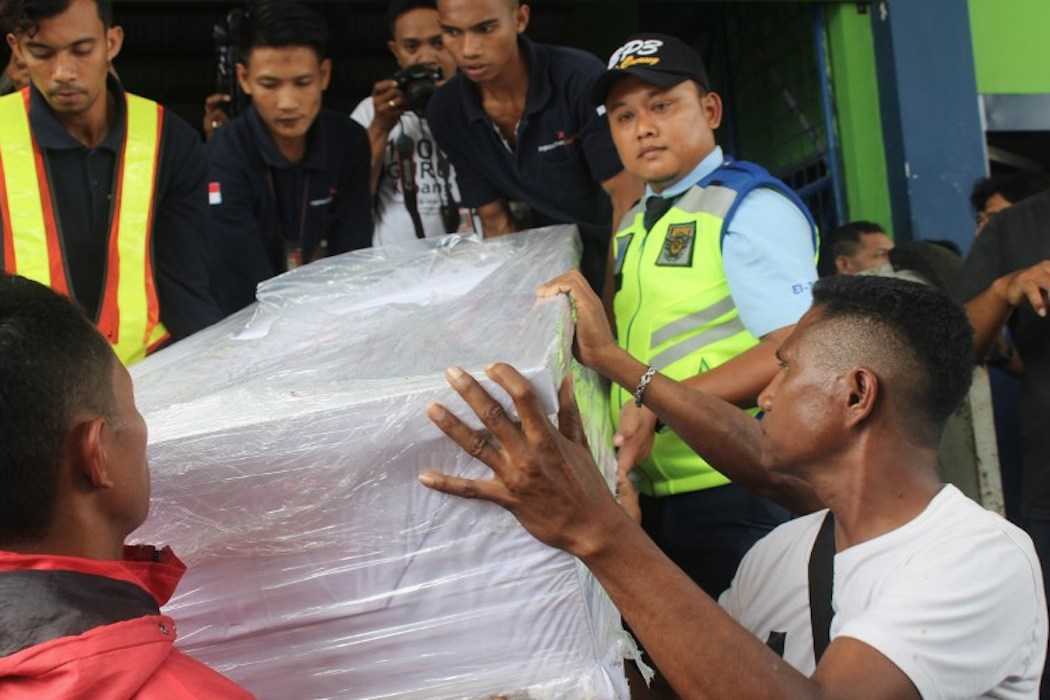 Ambrosius Koa (front right), a relative of overseas worker Adelina Sau, a domestic helper who died in Malaysia, helps airport officials unload her coffin after its arrival at Kupang airport in East Nusa Tenggara on Feb. 17. Two people were arrested in Indonesia on human trafficking charges in connection with the death of the maid. (Photo by Joy Christian/AFP)

As the predominantly Christian Indonesian province of East Nusa Tenggara gears up for a gubernatorial election calls are mounting for an immediate end to human trafficking, which has been surging in the region.

Voters in this southernmost province will head to the polls on June 27 to choose among four candidates. Nearly 3.19 million people are expected to vote.

On that day some 16 other provinces, 39 municipalities and 115 districts will cast ballots for governors, mayors and district heads.

Among those desperate for change is Ambrosius Ku, whose 21-year-old cousin Adelina Jemira Sau from South Central Timor district died earlier this year at the hands of her employers in Malaysia.

"We want a new governor who will go and see the real situation in remote areas. We live far away in the city but there is a lack of information about what documents a person needs to become a migrant worker," Ku said.

"We need to be clearly informed about the recruitment process. We hope there will be no more trafficking victims like Adelina. We want a new governor to deal with such cases," he said.

Sau is one of at least 34 migrant workers from the province who have died overseas this year, mostly due to brutal treatment, according to the Indonesian Migrant Workers Placement, Protection and Monitoring Agency in Kupang, the provincial capital.

Last year, Jakarta-based Migrant CARE, an NGO that advocates on behalf of the rights of migrant workers and their families, recorded the deaths of 62 migrant workers as a result of sickness and accidents: Only one was properly documented while the others had been working illegally in Malaysia.

The International Organization for Migration said East Nusa Tenggara has the highest number of human trafficking cases in Indonesia. There have been at least 7,200 victims from the province, 82 percent of whom were women.

"The level of human trafficking in this province is worrying. It's a complex issue," said Doni Parera, a 40-year-old layman from East Manggarai district.

"The new governor has to pay very serious attention to this issue," he added.

Wahyu Susilo, the executive director of Migrant CARE, cited a range of social, economic and political reasons as the reasons why trafficking is such an issue in this impoverished province, where 20 percent of its 4.9 million people, mostly Catholics, live below the poverty line.

"Poverty is surely the main reason but corruption and mismanagement by the local administration have made things worse," he said.

According to a report by Indonesia Corruption Watch released early this year, graft cases in regional governments typically involve abuse of local or state budgets, illegally obtained permits for infrastructure projects, corruption in procurement projects and bribes to earn promotions.

One of the gubernatorial candidates — Marianus Sae, a Catholic, the non-active head of Ngada district who is currently in jail — was arrested in February for allegedly taking bribes from a contractor for infrastructure projects since 2012.

He was later accused of using the money to finance his bid to become the provincial governor.

Migrant CARE, which has focused on human trafficking in the region for the last five years, has taken steps to address the rise in trafficking cases in cooperation with village leaders, civil groups and religious organizations.

Among the programs it has successfully introduced is one called Village Caring for Migrant Workers, which aims to protect mostly female workers from remote villages. They are considered particularly susceptible to unscrupulous recruiters.

"However, the local government seems to be ignoring what is happening. They don't see human trafficking as a priority and they only speak up when there are more victims and that creates [embarrassing] newspaper headlines," said Susilo.

Rights groups hope that a new law approved by legislators in 2017 to better protect migrant workers will serve as a reminder to the new governor that action must be taken and stiff punishments meted out.

"Everyone who wants to work overseas must be listed in order to prevent them from becoming victims of human trafficking," added Goa Sola, who also serves as director of the Advocacy Service for Justice and Peace.

The new law, which obliges aspiring migrant laborers to register with officially accredited recruitment agencies, is expected to help reduce the number of trafficking cases in the province.

This will happen "at least within the next 10 years," said Yuli Adiratna, an official at the Ministry of Manpower.

"It can't be done quickly. The most difficult part is the local culture. Lembata district, for example, has a culture in which people are encouraged to work overseas," he added.

"We still need to improve the program," he said.

With such demand from the public to banish human trafficking to the annals of history, Benny Kabur Harman, a 56-year-old Catholic candidate for the role of governor, is committed to ending the practice.

He has come up with a list of programs to help affect change: Providing each village with a database on migrant workers; arming unemployed people with skills training, for which they earn certificates; and helping people to find jobs.

"With one of these certificates, they can work overseas," he said. "This is their right."

A special team will also be formed to try and eradicate poverty and stamp out trafficking.

"Human trafficking is a crime against humanity," Harman said.