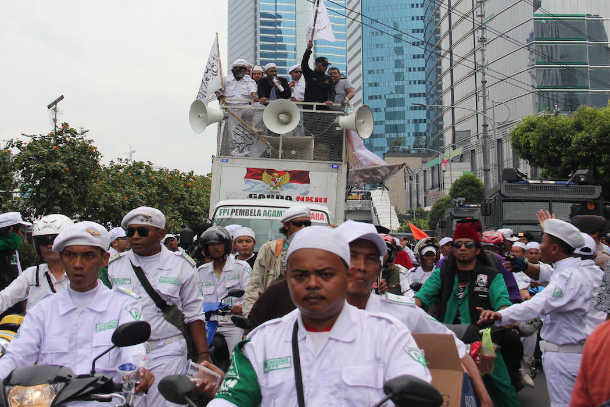 Members of the Islamic Defenders Front or FPI hold a protest rally at the 'Facebook' office in Jakarta in 2017 criticizing the role of the social media platform in Indonesia. (Photo by Konradus Epa/ucanews.com)

Public pressure is mounting on authorities to close down the hard-line Islamic Defenders Front, which is known by its Indonesian language acronym, FPI.

Critics of the radical militants argue that the Indonesian government should not renew their organization's operating license when it expires next month.

Hundreds of thousands of people have endorsed an online petition calling on the Home Affairs Ministry to act decisively on the basis of FPI's communal intolerance and violent ideology.

Since being established just over 20 years ago, it has targeted religious minorities and attacked free thinkers.

The petition 'Stop the Permit of FPI' was launched on a website called Change.org on May 6, and has already gained the support of more than 250,000 netizens.

"Considering FPI's permit will expire, we jointly reject the extension of its license because the organization is a radical group, supports violence, and backs HTI (Hizb ut-Tahrir),” the petition states.

Hizb ut-Tahrir, a radical group that promoted establishment of an Islamic caliphate, was dissolved by the government in 2017.

A Home Affairs Ministry official, identified only as Lutfi, confirmed that the FPI permit will expire.

"Yes, (its permit) will expire in June (this year)," Indonesian news portal Tempo.co quoted Lutfi as saying on May 7.

FPI was established on Aug 7, 1998, in Jakarta by conservative Islamic leaders including Muhammad Rizieq Shihab, and claims to have more than five million members nationwide.

A 2013 home ministry regulation obligated mass organizations to renew their licenses every five years. FPI renewed its license on June 20, 2014.

FPI chairman Sobri Lubis rebuked those seeking to terminate its operations, stating that a permit extension is being sought.

Lubis maintained that FPI's activities are positive for Indonesian society.

However, members of the group have opposed the establishment of new non-Muslim houses of worships, including churches.

They have also raided restaurants and entertainment centers that remained open during the Muslim fasting month of Ramadan.

"The ministry should not extend its permit and dissolve it because FPI has caused social unrest," he told ucanews.com.

Arifin added that FPI had become a "nest of terrorists" that was culpable for the instigation of riots.

Petrus Selestinus, a Catholic lawyer, asked the government to seriously respond to the public outcry against members of the group, who he accused of disturbing public order and peace.

"It often intimidates, persecutes other people," he told ucanews.com

The ministry must be brave to control hard-line groups and prevent infiltration of radical movements into state institutions, Selestinus added.

However, Reverend Gomar Gultom, general secretary of the Communion of Churches in Indonesia, said dissolution of FPI and other hard-line groups would not significantly curb radicalism.

Radical groups that were dissolved could simply set up another underground organizational framework that was difficult to uncover, Gultom warned.

He said instead police needed to act against all forms of violence and lawlessness.