National Commission for Women accused of having 'hidden political agenda' 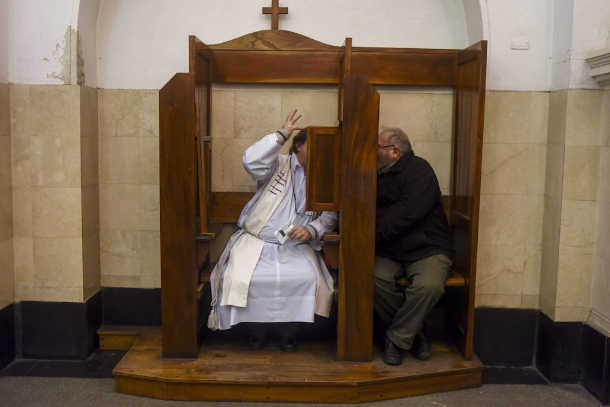 A priest administers confession to a man at a church in Buenos Aires, Argentina, in August 2017. A proposal by an Indian women's group to ban confession has angered Catholic clergy. (Photo by Eitan Abramovich/AFP)

An Indian federal agency has proposed abolishing the sacrament of confession on grounds that Christian priests misuse it to blackmail and target women, but church officials believe the plan is unnecessary interference in religious affairs.

The National Commission for Women, a body that protects women's interests, has also proposed a federal inquiry into two cases of rape and sexual assault involving clergy of two Christian churches in Kerala, media reports said.

"The priests pressure women into telling their secrets and we have one such case in front of us. There must be many more such cases and what we have right now is just a tip of the iceberg," commission chairwoman Rekha Sharma said.

The commission probed a man's claim that four priests of the Malankara Orthodox Syrian Church used the confession secrets of his wife to blackmail and sexually exploit her.

It also investigated a June 29 complaint by a 48-year-old Catholic nun that Bishop Franco Mulakkal of Jalandhar diocese in Punjab raped her four years ago. She accused the bishop of abusing her 13 more times over the following two years on his visits to Kerala.

Both cases are now under police investigation. The commission constituted an independent panel to probe them and sent its findings to Prime Minister Narendra Modi, Home Minister Rajnath Singh, Women and Child Development Minister Maneka Gandhi and the heads of police departments in Kerala and Punjab.

Indian bishops said the commission's proposal to scrap confession was unwarranted interference in the affairs of Christians.

"It is none of their business to interfere with the religious matters of Christians," said Bishop Theodore Mascarenhas, secretary-general of the Catholic Bishops' Conference of India.

He said allegations of misuse of confession for sex are "the rarest of the rare" in the church's history and "generalizing and stigmatizing a whole community for the alleged misdeeds of a few people is totally unfair and uncalled for."

The regional bishops' council in Kerala said the proposal has "shocked not only Christians but all those who stand for religious freedom."

It said the commission acted irresponsibly and with ulterior motives when it made the proposal unilaterally on a subject on which it has no mandate.

The commission's inquiry into criminal cases under police investigation shows the "hidden political agenda and the communal nature" of the individuals who have submitted the report, the council said.

It said the proposal violates the freedom of religion guaranteed by the constitution and is part of an effort to create sectarian tension and violence.

Christian leaders have been complaining that since Modi came to power with his pro-Hindu Bharatiya Janata Party (BJP) in 2014, violence and harassment against Christians have increased. Hindu groups and officials are accused of augmenting anti-Christian activities to accelerate their goal of making India a Hindu-alone nation.

Archbishop Leo Cornelio of Bhopal said the commission has no reason to call for the "abolition of something Christians consider sacred just because of an aberration."

"What we need are corrective measures rather than generalizing one or two incidents and abolishing time-tested practices like confession," he said.