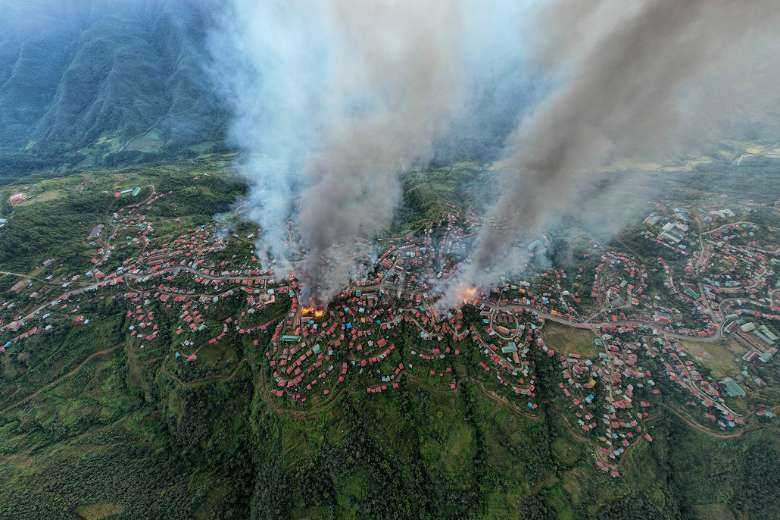 This aerial photo taken on Oct. 29 shows smoke and flames rising from Thantlang in Chin state, where more than 160 buildings were destroyed by shelling by the military, according to local media. (Photo: AFP)

The United Nations Security Council has been urged to convene a meeting on the escalating attacks in Myanmar’s western Chin state and address the deteriorating humanitarian, human rights and political crisis in the beleaguered country.

Some 521 Myanmar, regional and international civil society organizations have called for the Security Council to adopt a resolution to consolidate international action to stop the military’s violence against the people of Myanmar.

“The UN Security Council must also impose a global arms embargo to stop the flow of weapons and dual-use goods to the Myanmar military junta,” the groups said in a Nov. 4 statement.

The call comes after the military began shelling the deserted town of Thantlang in Chin state where more than 160 houses including two churches were on fire. Soldiers also torched houses at random.

Save the Children, whose office in Thantlang was set on fire, and the Chin Human Rights Organization strongly condemned the recent attacks, stating “the incident is further evidence of a deepening crisis in Myanmar” as the violence continues to affect large numbers of children across the country.

The junta has continued its violent assaults through Myanmar, recently deployed troops and increased its attacks against civilians in Chin state, Sagaing and Magwe regions in northwestern Myanmar while continuing its attacks in Karenni, Karen and Shan states.

The predominantly Christian Chin state has been at the forefront of some of the strongest resistance to the junta and has witnessed fierce attacks by the military including air strikes, heavy artillery and indiscriminate attacks on civilians while hundreds have been arbitrarily detained and dozens killed.

Prior to the most recent attack, more than 10,000 residents from Thantlang town had already fled from their homes as the military indiscriminately shot into houses and set off fires by shelling in September.

The UN special rapporteur on human rights warned of a greater catastrophe and further mass atrocities amid the deployment of tens of thousands of troops, stating these tactics are ominously reminiscent of those employed by the military before its attacks against the Rohingya in Rakhine state in 2016 and 2017.

Some 29 Rohingya organizations recently urged the Security Council not to repeat the mistakes it made in 2017 by failing to act on warnings of an impending military offensive against the Rohingya.

“The human security risk not only threatens the people of Myanmar but also regional and thus global security and peace,” the groups said.

They said the Security Council must demonstrate that it will take concrete actions to stop the junta from committing further atrocities and posing further risk to the security of the people of Myanmar.

DAVID CONMANERON
britain should be made to explain why it let the junta take over the myanmar embassy in london from a democratically elected government ,
Reply