Call for release of Thai prisoners charged with royal defamation 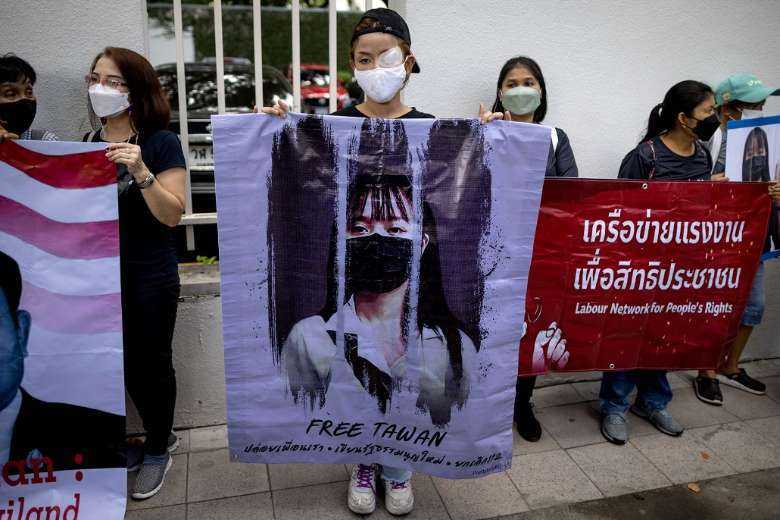 Protesters hold banners during a demonstration calling for the release of prisoners charged under Thailand's royal defamation law outside the US embassy in Bangkok on May 10. (Photo: AFP)

A group of young Thai democracy activists organized a rally outside a cultural center in Bangkok on May 10 calling for all political prisoners held on royal defamation charges to be released immediately.

Defying security officials who had cordoned off the area, the activists denounced Thailand’s military-allied regime for prosecuting young Thais demanding a return to full democracy with equal rights for everyone.

“We live in a dictatorship where you don’t even have the right to ask questions,” a young democracy activist told a UCA News reporter, referring to the fact that several young Thais have recently been charged with royal defamation for conducting street polls about the monarchy.

Since the summer of 2020 when youth-led pro-democracy protests erupted in Bangkok and elsewhere in Thailand, thousands of young people have been charged with various offenses, hundreds of them with serious crimes such as sedition and royal defamation, both of which carry long prison sentences.

“This regime is illegitimate, which is why they harass and persecute us,” one of the speakers at the protest said in a swipe at the government of Prime Minister Prayut Chan-o-cha, a former army chief who seized power in a coup in 2014 and has since rolled back civil liberties in Thailand.

The activists also demanded that the authorities release all political prisoners held on charges of insulting the officially venerated monarchy.

“A country that jails its young people has no future,” one of the activists, a university student, told UCA News.

Several leaders of the youth-led pro-democracy movement have been detained at prisons in Bangkok as they await their trials for royal defamation and other crimes.

Last week a criminal court in Bangkok revoked bail for two activists who had called for a reform of the monarchy, saying the young women had violated their bail conditions by causing a public disturbance.

The two activists have been charged with three counts of royal defamation, a crime punishable by up to 15 years in prison per charge, for conducting street polls with passersby regarding the royal family.

After their bail was revoked last week, a group of student activists staged a protest outside the Women’s Central Correctional Institution in Bangkok where the two activists are held.

“Lese majeste is a tool to jail young people who are innocent and would like to express their own opinions. It is uncivilized and barbaric"

A 17-year-old activist, wearing her high school uniform, shaved her head in protest at the court’s decision and held up three fingers in a salute that has been adopted by the country’s youth-led pro-democracy movement.

Despite such acts of continued defiance, authorities appear determined to crush the movement by charging young Thais, including minors, with serious crimes and imprisoning the movement’s leaders to prevent them from organizing further protests.

On May 10, the same day that protesters demanded the release of all political prisoners, another young woman was charged with royal defamation.

At the same time, a factory worker was detained by police for sharing content critical of the monarchy on Facebook, according to Thai Lawyers for Human Rights, which assists people slapped with politically motivated charges such as royal defamation, also known as lese majeste.

“Lese majeste is a tool to jail young people who are innocent and would like to express their own opinions. It is uncivilized and barbaric,” one commenter noted online.