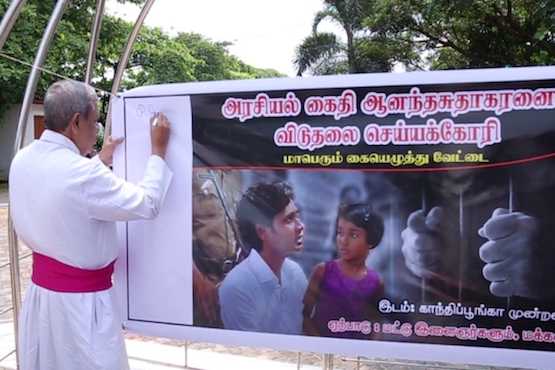 Satchithanantham Ananthasuthakaran's 13-year-old son and 10-year-old daughter have written to Sri Lankan President Maithripala Sirisena seeking a pardon for his sentence of life in prison.

He was convicted of involvement in a bombing campaign during the country's 1983-2009 civil war between minority ethnic Tamils and the island nation's security forces.

Since the recent death of the children's mother, they have been cared for by their ailing grandmother.

"We would both like to meet you, so please give time for us," said the children in the letter sent last month to the president.

Campaigners are seeking a pardon for Ananthasuthakaran and other Tamil prisoners, including by collecting signatures on a petition.

Bishop Joseph Ponniah, of Batticaloa has supported the bid. He called on Sirisena to exercise mercy, not least in relation to the suffering of loved ones over many years.

Many youth groups, students and civil society organizations are also endorsing the pardon campaign for those imprisoned under draconian laws.

The government has not fulfilled a promise to replace the security measures with laws more in keeping with domestic and international norms.

Campaigners say some Tamil political leaders were arrested only on suspicion of links to the Tamil Tiger rebel group.

More than 100,000 people were killed on both sides during the conflict.

Demonstrations have been staged during recent months to press for the release of political prisoners.

Anglican Father Marimuthu Sakthivel said that all 112 Tamil political prisoners should be pardoned.

When Ananthasuthakaran was arrested 11 years ago, he was only 26 years old. His son was just two and his daughter a tiny baby.

Ananthasuthakaran's wife died on March 15 and he was only given three hours by prison authorities to attend her funeral.

"When he returned from the cemetery after the rituals, his daughter got into the prison van," Father Sakthivel said. "It was a heartfelt situation."

All long-term political prisoners had sad stories to tell, he added. Relatives of political prisoners demand the release of their loved ones at a protest in Colombo in October 2015. (Photo by Niranjani Roland/ucanews)