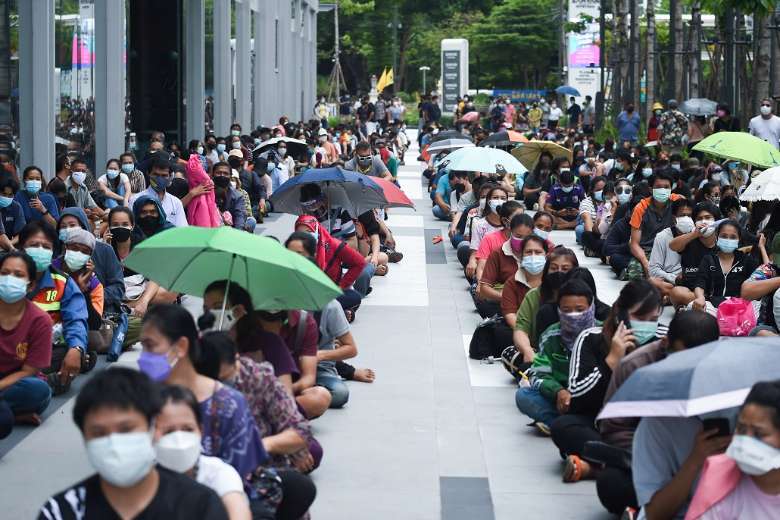 People queue for walk-in Covid-19 vaccinations at a shopping mall in Bangkok on July 31. (Photo: AFP)

Migrant laborers who work as domestic helpers in Thailand should be given priority in vaccination as they are at increased risk of contracting Covid-19, rights advocates have said.

Many of the estimated 100,000 migrant workers employed as domestic helpers have contracted the potentially deadly disease from their employers and some have been fired as a result, according to the Migrant Network Group.

Foreign domestic helpers, who primarily come from Myanmar, Cambodia and Laos, frequently care for elderly and other medically vulnerable locals, which means that reducing the chance of infections in households is of primary importance as Thailand is experiencing a severe Covid-19 outbreak, representatives of the labor rights group said during an online discussion on Aug. 17.

“We are rushing to roll out vaccines for target groups such as the elderly. Yet we have no policy to take care of their helpers who work in close contact with them,” said Adisorn Kerdmongkol, a research officer at the group.

In addition, many prospective employers in Thailand request proof of vaccination from migrants applying for jobs as domestic helpers, but most migrant laborers have had no way of gaining access to vaccines, rights advocates say.

Thailand is in the grip of a raging outbreak of the novel coronavirus largely as a result of the highly infectious Delta variant, which was first detected in India earlier this year.

Even though domestic workers are protected under the law, monitoring and enforcing the law in households are almost impossible

To date, more than 930,000 people in Thailand have been infected, the vast majority of them over the past few months, and nearly 7,800 people have died.

A mass vaccination drive was launched by the government in early June, but the project has been mired in controversy from the start owing to a chronic shortage of vaccines and the frequently questionable allocation of available doses.

As of Aug. 17, fewer than 5.3 million people, or just under 8 percent of the country’s 69 million citizens, had been fully vaccinated, while nearly 18.4 million people had received a first dose.

Millions of Thais, especially those from disadvantaged backgrounds, have so far been unable to gain access to vaccines. Most migrant workers have been in a similar situation, although tens of thousands of those that work in factories owned by influential Thai conglomerates have been vaccinated.

Rights advocates have repeatedly called on the Labor Ministry to allocate vaccines for migrant workers employed in high-risk occupations such as domestic helpers.

Complicating matters for many foreign-born domestic helpers, who invariably come from disadvantaged socioeconomic backgrounds, is that they routinely lack health insurance and any form of social benefits because they are employed illegally, rights advocates say.

“Even though domestic workers are protected under the law, monitoring and enforcing the law in households are almost impossible. It has been argued that only about 20 percent of employers actually comply with the regulations.”