Business in Rome gets a boost from the new papal appointment

From the National Catholic Reporter, March 21 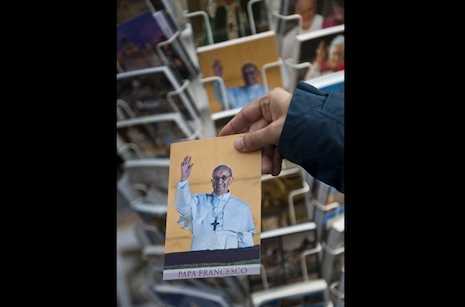 On the night of the unexpected election of Argentina's Cardinal Jorge Bergoglio as Pope Francis, many of the Romans gathered in St. Peter's Square were actually rooting for an American pope -- and not only for the breath of fresh air a "Yankee pope" promised to bring to the centuries-old traditions of the Vatican.

Rome's business owners had pinned their hopes on the election of an American pope in the hope it would generate an extra influx of tourists and bring some much needed relief to the Eternal City's crisis-battered economy.

Rome was hit particularly hard in the global recession that saw Italy's gross domestic product (the sum of all goods and services produced) shrink by 2.2 percent in 2012. Recent data show that unemployment in the Eternal City rose by almost 3 percent in the last four years.

"We hope the conclave lasts for a few days and that they elect an American pope: he would bring more tourists," the owner of a cafe near the Vatican told the La Repubblica newspaper before the conclave.

As it turned out, the cardinals chose the new pope quickly, after only two days of voting, and opted for a Latin American.

Still, the first few days of Bergoglio's papacy have sparked enthusiasm in Rome and throughout the world. And Roman shop owners and hotel managers have started to believe the election of Pope Francis will still be good news for them.

The new pope is "worth around 50 or 55 million euros a month," Giuseppe Roscioli, president of Italy's hoteliers association, told the Corriere della Sera daily.

If at first tourists will mostly come from Argentina, "then they will come from all South America: Brazil, Mexico and so on," he said.

The positive effect of Bergoglio's election will be felt for five or six months, he added.

The recent influx of tourists and journalists who wanted to witness the papal transition has already boosted Rome's economy.

The day of Francis' election, the Italian newspaper La Stampa reported that rates for hotel rooms and rental apartments in the vicinity of the Vatican had skyrocketed since Pope Benedict XVI's surprise resignation announcement Feb. 11.

Renting an apartment near St. Peter's for the duration of the conclave might cost up to 8,000 euros (about $10,000), or even more if it sports a room with a view of St. Peter's Basilica or the Sistine Chapel's chimney.

The price of hotel rooms more than doubled compared to normal rates this season, according to Federconsumatori, a consumer association.

Small businesses around the Vatican, such as souvenir sellers, have benefited, too, even if Bergoglio's election also surprised them.

Just minutes after Francis finished introducing himself to the crowd in St. Peter's Square on March 13, a woman perusing the shelves of a tourist shop just outside the square asked the storekeeper, "When will you have souvenirs of the new pope?"

"Tomorrow, maybe the day after tomorrow," the man answered. "I just called the supplier and he says they were planning for the Italian or the Brazilian. They didn't expect this. So it's going to take a little longer."

It usually takes no longer than 48 hours for souvenir suppliers to produce rosaries, medals, key chains and candles with the image of the new pope.

Cecilia Lozzi of Mondoroma Distribuzione, a company that makes papal souvenirs, said after a new Vatican law introduced copyright on the pope's image, producers must wait for the Vatican newspaper, L'Osservatore Romano, to supply an official image.

But even as they wait for the official image, many producers decided to use the iconic image of Francis smilingly saluting the crowd from the balcony of St. Peter's Basilica.

Less than 48 hours after his election, Bergoglio's face already adorned rosaries, postcards and prayer cards sold at the trinket stands near St. Peter's Square. Prices ranged anywhere from 75 cents to $9.

While the most popular papal souvenirs remain those bearing the image of John Paul II, souvenir shops hope Bergoglio will eventually prove just as popular.

"I think he's going to be a good pope," Stefano Di Segni, owner of a trinket stand around the Vatican for 30 years, told Reuters. And, he hopes, good for business.