Burned Catholic center rises from the ashes in India 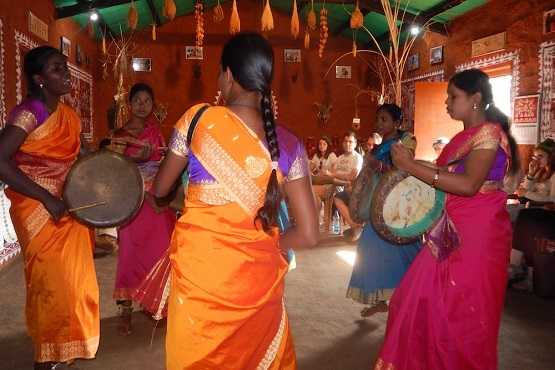 Tribal women performing their traditional dance in front of a group of tourists at Jana Vikas center in Odisha state, India. The center was burned in a riot but now it is functioning again. (ucanews.com photo)

A mob, maddened by religious hatred, burned a church cultural center in eastern India nine years ago but now it is back in action.

Jana Vikas (people's development) was established in 1993 to preserve and promote the indigenous culture of tribal communities in Odisha state but the 2008 riots destroyed it completely.

The center was one of more than 500 Christian churches, institutions, convents and prayer halls Hindu extremists burned, besides hundreds of Christians homes, displacing some 50,000 and killing over 100 people during the two-month long riots that started in September 2008.

The center functions under Cuttack-Bhubaneswar Archdiocese in Odisha and promotes tribal art and culture and aims to help promote tribal people to mainstream society. Father Singh said traditional songs and dances of tribal people "are vanishing due to modernization. Ours is a small initiative to promote and preserve this culture," he said.

The center has trained several young people in traditional arts so they can promote them at events. There is also an annual cultural meet featuring over 20 traditional dances from all over the district.

Indigenous seeds and plant varieties are fast disappearing too so the center annually organizes a seed festival to help local farmers interact and swap them.

Their latest performance was at Paradip Beach Festival held March 18-26. The organizers of the festival, which aims to promote clean beaches, recognized the tribal people with an award.

The award is a recognition for the work of the center, said Archbishop John Barwa of Cuttack-Bhubaneswar. "The world knows that our work for the tribal poor is honest and sincere," said Archbishop Barwa.