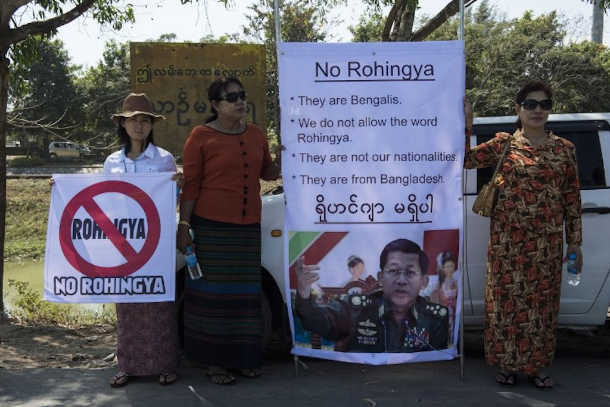 Supporters of Myanmar military chief Min Aung Hlaing display his portrait during an anti-Rohingya rally by a Buddhist group outside Yangon's Thilawa port as a Malaysian ship carrying relief aid for the Muslim minority was due to arrive on Feb. 9, 2017. (Photo by Romeo Gacad/AFP)

While Myanmar is facing global criticism for the atrocities its military has committed against minority Rohingya Muslims, the general population is showing little sympathy for their plight amid growing nationalism.

Members of the public in this Buddhist-majority nation are even promoting anti-Facebook campaigns or ditching the social media giant altogether for rival Russian networks after it recently blacklisted military chief Min Aung Hlaing and scores of Myanmar generals.

Myanmar launched a bloody crackdown on the ethnic Rohingya in August 2017 after a series of alleged insurgent attacks that forced 700,000 to flee their homes in northern Rakhine State for refugee camps in Bangladesh.

But while the United Nations has dubbed the campaign a textbook case of "ethnic cleansing," inside Myanmar the military is being credited for defending the nation from "illegal Bengali migrants," as the Rohingya are often branded.

On Sept. 3, a U.N. report singled out Min Aung Hlaing and five key generals as being liable for prosecution for attempted genocide and war crimes.

It also criticized State Counselor Aung San Suu Kyi , a Nobel laureate who has struggled as Myanmar's civilian leader while attempting to appease the powerful military, for failing to speak out on behalf of the Rohingya.

She received a public appeal on Sept. 4 from the wives of two jailed Reuters reporters who were recently sentenced to seven years' hard labor for breaking the Official Secrets Act while investigating a massacre of the Rohingya.

However, as the one-year anniversary of the Rohingya crisis has just passed, the media in Myanmar made scant mention of the U.N. report despite broad international coverage.

Thet Swe Win, branded a "traitor" on social media for speaking up for the Rohingya, said the government is repressing the media and granting them no access to Rakhine.

He said there is little if any independent and uncensored news for the public to digest, which bodes ill for those dreaming of a diverse society where all religions and ethnic groups can peacefully coexist.

"There is no counter to the official narrative, and a lack of critical thinking has fueled growing nationalism and anti-Rohingya sentiment," Thet Swe Win, director of the Centre for Youth and Social Harmony, told ucanews.com.

Aye Lwin, the Muslim co-founder of Yangon-based Religions for Peace, said the public has been overwhelmed by the government's official story that the Arakan Rohingya Salvation Army (ARSA) is attempting to seize control of Rakhine, justifying the military crackdown.

Even senior officials from the government and ruling National League for Democracy (NLD) view the Rohingya , who are denied basic rights and not recognized as Myanmar citizens, as illegal immigrants, he said.

"Old attitudes die hard. We really need to have fresh sources of information and more critical thinking so that we may find a lasting solution to the crisis in Rakhine," he told ucanews.com.

Aye Lwin used to belong to the Rakhine Advisory Commission, which was led by former U.N. secretary-general Kofi Annan, who died on Aug. 18.

Suu Kyi said during a lecture in Singapore three days after his death that the government had implemented 81 of the commission's 88 recommendations.

However, Aye Lwin claims this was a blatant case of misrepresentation as only a week or so earlier, Myanmar's social welfare minister, Win Myat Aye, said in Denmark that the country was still at a very early stage of implementation.

"What she said in Singapore was not correct," Aye Lwin said. "I don't know how she was misinformed."

Suu Kyi said "the outside world can choose the issues on which they wish to focus." She also cited terrorist attacks as being the root cause of the conflict. "Unless this security challenge is addressed, the risk of inter-communal violence will remain," she said.

Aung Myo Min, executive director of a Yangon-based NGO called Equality Myanmar, said Suu Kyi is walking a delicate tightrope in retaining her high level of popularity in the country.

Thet Swe Win said Suu Kyi may think that if she speaks out on behalf of the Rohingya, it would affect national reconciliation. "But what she is doing is ignoring the truth and neglecting social justice," he added.

As international pressure mounts on her government, the military still has the upper hand as it controls national security, the country's borders and home affairs, including the police, under the 2008 charter.

Yet while it is trying to position itself as the nation's savior, the rest of the world doesn't quite agree — both online and offline.

On Aug. 27, Facebook took down the profile of Min Aung Hlaing as well 17 other personal accounts and 52 pages in the wake of the the U.N.'s damning report on the military's atrocities against the Rohingya.

Presidential spokesman Zaw Htay rushed to address the Facebook ban and reassure the leaders of the military that the government had not been forewarned of the social media giant's plans.

It also triggered a nationalistic flare-up with many Myanmar citizens replacing their Facebook profile pictures with photos of Min Aung Hlaing, while some groups publicly stated they were digitally migrating elsewhere.

Min Aung Hlaing's Facebook account had 2.8 million followers when it was shut down at the end of August. By Sept. 5, the military chief had amassed 34,000 followers on VK.

"[Facebook] has been used to convey public messages but we know the ultranationalist Buddhists have their own Facebooks and are really inciting a lot of violence and a lot of hatred against the Rohingya or other ethnic minorities," said Yanghee Lee, the U.N.'s special rapporteur to Myanmar.