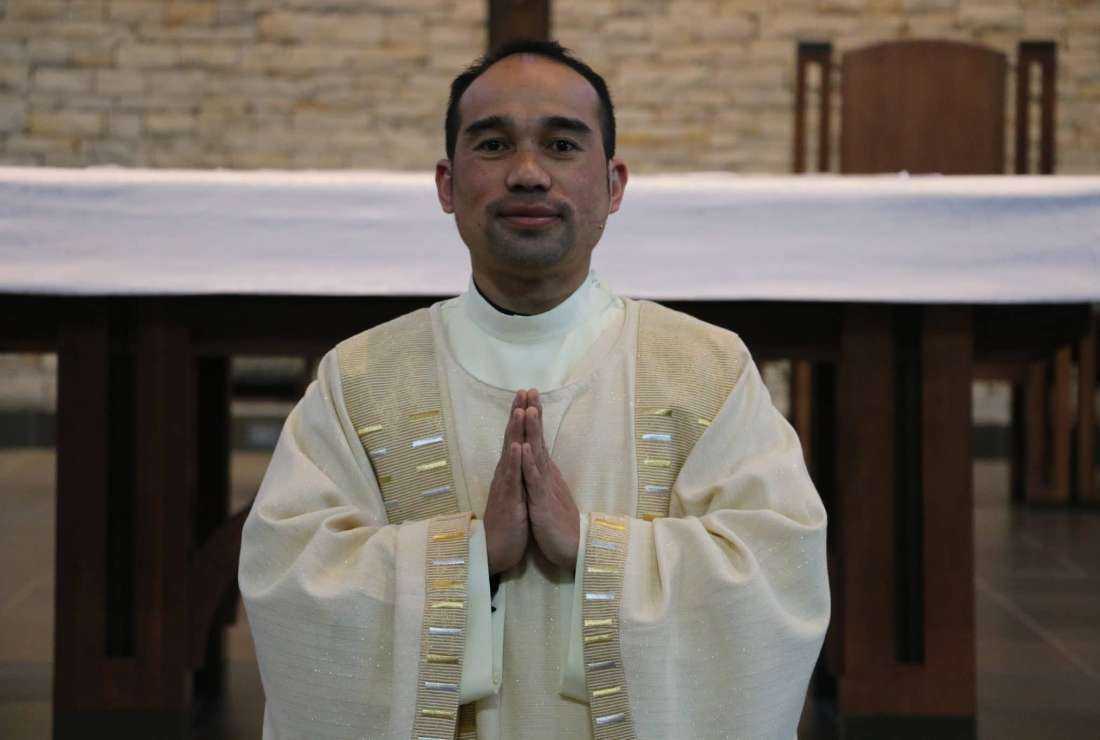 Deacon Martin Ma Na Ling of Owensboro, Ky., during his priestly ordination Mass at the Owensboro Sportscenter on July 2. (Photo: Diocese of Owensboro)

When Bishop William F. Medley was ordained the bishop of the Diocese of Owensboro 12 years ago, "I had never heard of Myanmar," he said at the July 2 ordination of Father Martin Ma Na Ling -- the second Myanmar-born seminarian to be ordained a priest in the United States.

The bishop could never have predicted that approximately 1,700 Burmese Catholics would come together to nourish their faith and participate in the historic ordination. And yet, he could not have been more pleased to welcome the attendees to Owensboro.

"It brings us great joy here in Kentucky to see our faith celebrated by the people of Myanmar who have come here to make the U.S. your home," said the bishop.

Western Kentucky has a significant number of refugees from Myanmar, formerly known as Burma, according to the Kentucky Office for Refugees, a department of Catholic Charities of Louisville.

The bishop expressed his gratitude to all who were attending in person, including a number of Burmese priests currently serving in the U.S. who had traveled to Owensboro for the weekend.

"Thank you," said Bishop Medley. "You are genuine missionaries to our nation."

He also welcomed Bishop Alexander Pyone Cho of Pyay, Myanmar, who had flown in for the celebrations. Unfortunately, due to multiple circumstances beyond their control, others who wanted to attend -- including Father Ma Na Ling's parents -- were unable to leave Myanmar for the ordination.

Addressing all who were watching the ordination via livestream, Bishop Medley told them his prayers were with them amid the ongoing sociopolitical turmoil of Myanmar.

He directly addressed Father Ma Na Ling's parents, who it was hoped were able to join via livestream, telling them: "Without your faith and love we would not be here today. Your faith was the first seed of his vocation."

Bishop Medley told the crowd that it was the 2019 diaconate ordination of now-Father Stephen Van Lal Than -- the first Myanmar-born priest ordained in the U.S. -- that showed him the deep faith of Burmese Catholics. This experience also was the motivation for the bishop's pastoral visit to Myanmar in early 2020, before the COVID-19 pandemic took the world by storm.

Turning to the seminarian he would be ordaining a priest for the Owensboro Diocese in a matter of minutes, Bishop Medley told him: "Martin, you are a man of joy; you are forever smiling."

"Many people will come to know Jesus because of your joy," said Bishop Medley. "By word and example may you build up the house that is God's church."

The bishop also encouraged the young people in crowd to consider the idea of a vocation to the priesthood or consecrated life. He suggested that if someone saw a possible vocation in a young person, let that person know.

"Maybe they will not think about this, unless we tell them," he said.

And to the crowds filling the Sportscenter that morning, he told them: "All of you, go therefore, and make disciples."