Father Rodrigue Sanon of Soubakaniedougou, a town in southwest Burkina Faso, had been missing since Jan. 19 Bishop Sanou called on the faithful 'to pray intensely for his soul and remain confident in the merciful love of the Lord.'

The body of a priest was discovered in a remote forest in Burkina Faso four days after he was declared missing.

"It is with deep sorrow that I bring to everyone's knowledge that the lifeless body of Father Rodrigue Sanon," Bishop Lucas Kalfa Sanou of Banfora announced Jan. 22.

Bishop Sanou called on the faithful of the diocese "to pray intensely for his soul and remain confident in the merciful love of the Lord."

Father Sanon, a priest in the southwestern town of Soubakaniedougou, disappeared Jan. 19 as he drove from his parish to Banfora to attend a meeting of priests with Bishop Sanou.

His vehicle was found Jan. 21 in the Toumousseni forest, located 11 miles from Banfora; his body was discovered soon afterward, according to Fides, the news agency of the Congregation for the Evangelization of Peoples.

While information regarding the circumstances of the priest's death has not been made public, it is believed Father Sanon may have been a "victim of bandits or fell into the hands of terrorists, given the context of insecurity in Burkina Faso," Fides reported.

According to a report by the U.N. Refugee Agency, increasing violence in Burkina Faso forced 1 million people from their homes between January 2019 and August 2020, making the country the fastest-growing humanitarian crisis in the world.

"Five percent of the country's entire population -- an astonishing one in 20 people -– is now displaced in the world's fastest-growing humanitarian and protection crisis," the agency said. "Attacks by armed groups in the north and east of the country have forced people to move multiple times and are set to push the numbers still higher," the August report said. 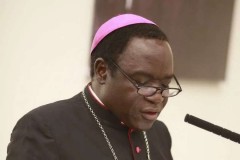