Burkina Faso police officers patrol the city of Gorom-Gorom near the Niger border in this file photo. (Photo: AFP)

A Catholic bishop in Burkina Faso has condemned an Islamist attack on a northeastern village which left at least 160 people dead and urged residents to "keep faith and stay united."

"They executed them, purely and simply, and then burned the market, houses and shops, and the vehicles, lorries and transport parked outside," Bishop Laurent Dabire of Dori said, decrying the June 5 attack on Solhan, a village in his diocese.

Although no group claimed responsibility, authorities blamed Islamists for the attack, which also left 40 people injured. It is believed to be the worst violent incident since the start of an insurgency in 2015.

In a Vatican Radio interview June 7, Bishop Dabire, president of the bishops' conference of Burkina Faso and Niger, said he believed the attack was retaliation for local involvement in a government-backed civil defense militia, set up in 2020 in the gold-mining area.

"People would like to do something, but what can they do, when faced with an invisible enemy, unknown and well armed?" the bishop asked. "We must not lose confidence in life, keeping faith firmly in hope, and staying united in face of the violence falling on us, in order to explore all solutions, including dialogue."

More than 5,000 French troops are deployed along Burkina Faso's borders with Niger and Mali to contain insurgents

Burkina Faso President Roch Marc Christian Kabore urged citizens to "stand united against evil forces," and declared three days of national mourning after the attack, which followed an assault a day earlier on another village, Tadaryat, which left 14 dead.

U.N. Secretary-General Antonio Guterres also condemned the "heinous attack," and called on the international community "to redouble support for member-states in the fight against violent extremism and its unacceptable human toll."

Meanwhile, Pope Francis said June 6 after praying the Angelus that he was praying for all those "suffering greatly from these repeated attacks."

More than 5,000 French troops are deployed along Burkina Faso's borders with Niger and Mali to contain insurgents linked to the Islamic State, al-Qaida and the Nigeria-based Boko Haram group, whose attacks have left 1,400 dead and more than 1 million people displaced. 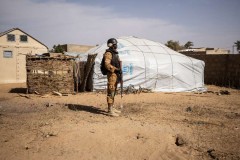 A source from the Vatican's nunciature in Ouagadougou told the Fides news agency June 7 that it was believed those perpetrating the massacre wished "to demonstrate their ability to control territory" as well as discourage local resistance.