Facing falling prices and loans they cannot repay, farmers are blaming market manipulation for the crisis Workers harvest paddy in a field in Pabna district of northern Bangladesh. Rice is the staple food in Bangladesh and provides a livelihood for millions of rural families. (Photo by Stephan Uttom/ucanews.com)

Rice is not only the staple food grain for Jalil Mia, like almost all Bangladeshi people, but also the only source of livelihood for his five-member family.

Jalil, 45, is a landless farmer and a Muslim father of three from Naogaon district of northern Bangladesh, the country’s rice-producing hub.

This year he planted Boro rice on 1.65 acres (6,680 square meters) of rented land with 50,000 taka (US$1,250) borrowed from a local non-government organization (NGO) on condition he paid back the loan after harvesting.

Favorable weather, timely irrigation and fertilizer contributed to a bumper harvest. After leaving the landowner’s share, he took home 1,800 kilograms of rice.

But the price of rice in the market left Jalil shocked. Its price plunged to a nearly three-year-low after the paddy price collapsed due to the abundant Boro harvest as well as healthy public and private stocks, local media reported.

The government has fixed a price of 1,040 taka (US$12) for 40 kg of rice, but the fall in price forced many farmers like Jalil to sell for 500-650 taka due to high supply and low demand. In many places the price for 40 kg of rice fell below the daily wage of a hired agricultural laborer.

On May 12, a frustrated farmer in Tangail district set his rice field on fire in a protest about low prices and a shortage of workers in an incident that sparked a massive media and public outcry.

“No farmer in the area managed to get the government’s fixed price, which could at least save farmers from incurring losses, if not any profit. I am likely to record a loss of 20,000 to 25,000 taka this season,” Jalil said.

As the Eid-ul-Fitr festival approached in early June in Muslim-majority Bangladesh, Jalil was left perplexed about how he was going to pay for his loan installment or celebrate the feast. 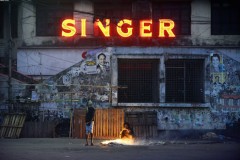 “I expected a good profit and I wanted to buy new clothes for my wife and children. I am wondering if that is possible for me. Eid is coming to us amid despair and sadness this time,” he said.

Mohon Tirkey, 26, an indigenous Mahali Catholic from Chapai Nwabganj district in the north, was facing a similar crisis.

“I am frustrated over the rice price. The money I will get from sales won’t be enough for the loan repayment, so I might need to sell a piece of land. Without support from the government, we will struggle for survival,” Tirkey told ucanews.com.

A vital crop for the economy

Bangladesh is the world’s fourth-largest rice producer after India, China and Indonesia. Rice plays a vital role in its economy. Nearly 75 percent of cropland and over 80 percent of the irrigated area of Bangladesh’s 8.57 million hectares of arable land are used for rice cultivation, according to the Bangladesh Rice Research Institute.

Rice offers employment for 48 percent of households or about 13 million rural families in a country where about 80 percent of people live in rural areas, the institute reported.

In 2016-17, Bangladesh produced 33.8 million metric tons of rice and the figure rose to 36.2 million tons in 2017-18, according to the Department of Agricultural Extension, which estimates that rice production will hit a new high with an additional 1.3 million tons this year.

Bangladesh has lost thousands of hectares of arable land due to housing, urbanization and industrialization for a population boom — from 75 million in 1971 to over 160 million today. Workers harvest rice in Sirajganj district in northern Bangladesh. Despite a good harvest, Bangladeshi farmers are lamenting the low price of rice in the market. (Photo by Stephan Uttom/ucanews.com)

Observers say the downturn in rice prices is a result of flawed food policy, market syndication and corruption.

“The market has been left with private millers and traders who control the market, dictate prices and deprive farmers,” a government agricultural official from Chapai Nawabganj district, who asked not to be named, told ucanews.com.

Even though Bangladesh has been boasting surplus rice production, rice imports are continuing, the official said.

“We need to follow the models of other rice-producing countries where farmers get incentives in the form of government food procurement schemes. Instead of importing, we need to help and encourage our farmers,” he added.

Farmers have increased rice production over the years but cannot make a profit due to the cash crunch and labor crisis, according to Rajib Hasan, a professor of economics at Hajee Mohammad Danesh Science and Technology University in Dinajpur district.

“Rice production has increased but also the costs, and many agricultural laborers have changed their professions. As farmers cannot cultivate rice with cash, they take loans and are forced to sell rice early even at a loss to pay back loans,” Hasan told ucanews.com.

“We have found that if farmers use half the amount of fertilizer and pesticides, production is good but costs go down,” Costa, former national coordinator of agricultural research for the development program at Caritas, told ucanews.com.

Farmers’ misery from market manipulation can be blamed on a nexus of unscrupulous middlemen, private rice millers and government officials, he said.

“In fact, the paddy price is very low while the rice price is high. A crisis has been created, so farmers sell paddy at a low price and millers make a huge gain. Millers offer a portion of profits to officials to keep them silent,” Costa added.

Current food policy also backs Costa’s claims. Under its food grain procurement program, the Food Ministry will buy 150,000 tons directly from farmers of 19.6 million tons of Boro rice harvested this year. Under the same scheme, the government will purchase 1.15 million tons of rice from private millers, the Daily Star reported on May 28.

That means millers are gaining both ways — buying paddy at a low price from the market and selling to the government at a good price.

Anima Rani Nath, a joint secretary at the Food Ministry, said the government is trying to tackle the problem sincerely.

“We are happy with a good harvest but we are also concerned that it has created a crisis for farmers. We are buying rice from them to give them a good price and we are discouraging rice imports to encourage farmers. We also have a long-term plan so that this kind of crisis does not emerge again,” Nath told ucanews.com.

“In addition, we will take action if there are allegations of irregularities.”

Farmer Jalil is distraught over the crisis. “We feed the nation but nobody cares whether we struggle or die,” he said.