Bulldozers roll out in India's capital to raze minority properties 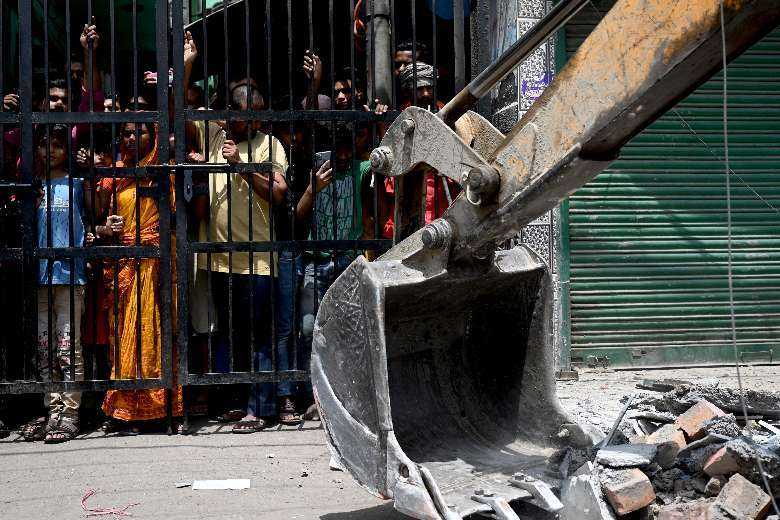 Residents watch as a bulldozer demolishes an allegedly illegal structure in Jahangirpuri in New Delhi, India, on April 20. (Photo: AFP)

Bulldozers rolled out on the streets of India’s national capital New Delhi to demolish allegedly illegal properties in a largely Muslim neighborhood before the Supreme Court called the action to a halt.

The demolitions began around 10am on April 20 amid a heavy security deployment in Jahangirpuri in northwest Delhi, about 25 kilometers from the Indian parliament.

The Muslim neighborhood had on April 16 witnessed a saffron procession to mark the birth anniversary of the Hindu deity Lord Hanuman erupt into violence as the participants brandishing swords and sticks marched past one of the local mosques.

On April 20 morning, residents watched helplessly as the bulldozers razed to the ground a string of stalls and houses encroaching on the roadsides. The wall and gates of a mosque were pulled down amid rising tension as the rubble was carried away in waiting trucks, according to eyewitness accounts.

The neighborhood heaved a collective sigh of relief when the Supreme Court stayed the action within hours.

Brinda Karat, a senior Marxist leader, was the only politician to rush to Jahangirpuri. She stood in front of one of the nine bulldozers waving a copy of the Supreme Court order, but to no avail. Civic and police officials at the demolition site claimed they needed to receive the court order “officially.”

“This is demolition of India’s constitutional values. This is state-sponsored targeting of the poor and minorities. The BJP must bulldoze the hatred in their hearts instead”

The demolitions were totally illegal and the officials were motivated to promote the communal agenda of the pro-Hindu Bharatiya Janata Party (BJP), Karat said.

Several Muslim residents and shopkeepers claimed they were being specifically targeted and not even given advance legal notice about the operation.

But officials of the North Delhi Municipal Corporation, which is governed by the BJP, claimed they were merely bringing down “illegal buildings that have encroached onto the roads.”

“This is demolition of India’s constitutional values. This is state-sponsored targeting of the poor and minorities. The BJP must bulldoze the hatred in their hearts instead,” Congress leader Rahul Gandhi tweeted.

“This is all you can expect from someone whose history is linked to corruption and riots. He [Rahul Gandhi] is doing no good to the country by sowing the seeds of hatred. He is maligning the country’s image,” retorted federal Information and Broadcasting Minister Anurag Thakur.

Delhi’s Deputy Chief Minister Manish Sisodia compared the action to “hooliganism” and said the only way to end it was “to bulldoze the BJP headquarters.”

“What is the BJP trying to achieve by sending bulldozers to an area where there was already communal tension?”

Sisodia, who belongs to the Aam Aadmi Party (AAP), was helpless as the national capital has twin administrations — a municipal corporation in addition to the provincial government. New Delhi’s security apparatus falls under the control of the federal government.

Hence, the civic and security affairs are helmed by the BJP, which opposition parties alleged led to unnecessary strife.

“What is the BJP trying to achieve by sending bulldozers to an area where there was already communal tension?” asked Delhi Congress leader Anil Chaudhary.

Akhilesh Yadav of the socialist-oriented Samajwadi Party said the BJP had turned bulldozers into a “new symbol of its brute power and high-handedness.”

“It is obvious that Muslims and other minorities, the backward and poor Dalits are the BJP’s target,” he told UCA News.

Residents said the situation remained tense in Jahangirpuri, which houses around 10,000 families — most of them Muslim migrants from Bangladesh.

Police have arrested 23 suspects including two juveniles, most of them Muslims, for the April 16 violence.

A group of Delhi BJP leaders met Federal Home Minister Amit Shah but remained tightlipped about what transpired between them.