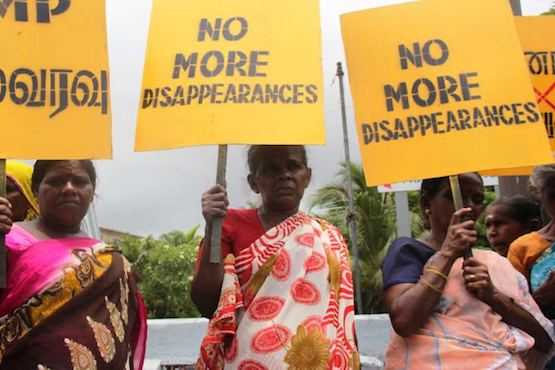 Relatives of of those who disappeared during the civil war in Sri Lanka stage a demonstration in Colombo asking for information about their family members, in this file photo. (ucanews.com photo)

Human rights activists have called on the Sri Lankan government to adopt a bill outlawing enforced disappearances, in a move condemned by Buddhist monks and opposition parties.

If enacted it would bring Sri Lanka, which according to the U.N. has the second highest rate of enforced disappearances in the world, into line with the International Convention for the Protection of All Persons from Enforced Disappearance.

The bill has proved controversial to Buddhists and opposition parties, with former President Mahinda Rajapakse saying the bill would endanger Sri Lanka's war heroes and admit culpability for disappearances.

It is estimated that as many as 60,000 people were killed or disappeared during Sri Lanka's civil war.

Ruki Fernando, a human rights activist and consultant to the Conference of Major Religious Superiors, said the international convention was an agreement amongst governments that disappearances should not happen in future.

"Ratifying this convention and passing a domestic law making disappearances a crime are two key legal steps for the prevention of disappearances in the future," said Fernando.

"There have been more than 65,000 complaints of disappearances according to government statistics. These include large numbers of Sinhalese youth who disappeared in the late 1990’s and many Tamils who have disappeared since then."

"In other countries like Argentina, Gueatamala, Chile, which have seen large numbers of disappearances, subsequent governments have taken strong legal, institutional, social and political measures to provide redress and prevent recurrences," said Fernando.

Families of the disappeared have held hunger strikes and handed over petitions to the government, U.N. and the international community, asking for justice for their loved ones killed by government forces during the civil war.

Journalists have also demanded the government introduce the law. The Working Journalists Association organized a forum with journalists, lawmakers and civic rights activists in Colombo on May 16, advocating for the change.

Fernando said that right now, families of the disappeared in the north and east of the country have been protesting by the roadside for nearly six months, demanding justice.

"Religious leaders, like chief Buddhist monks, should not be blocking even the minor measures the government is taking. They should try to live up to their preaching of Metha [loving kindness], Karuna [compassion], Muditha [joy] and be at the forefront of support for families of the disappeared."

"They should be demanding answers from the government and use their influence to strengthen and expedite measures to prevent such occurrences in the future," said Fernando.

Arul Raj, a Tamil rights activist who works with families of enforced disappearances, said relatives need to know what happened to their loved ones.

"The government has already set up an Office of Missing Persons in Colombo but still it is not in action," said Raj.

President Maithiripala Sirisena signed the Office of the Missing Persons Act to establish an office on July 20. The bill was passed in parliament in August 2017.

He said that relatives don't have any faith in the local mechanism. "The country should be ashamed that our disappearances number more than 100,000," he said.