Six to be tried for Myanmar killings 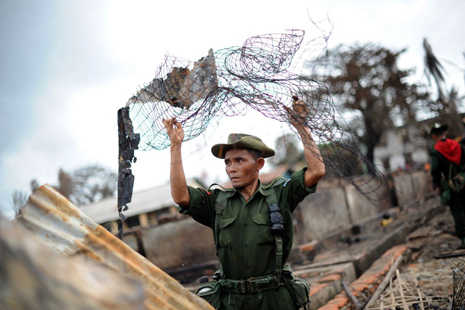 More than 200 people died in violence between Buddhists and Muslim Rohingya in Arakan state in the days after the June 3, 2012 bus attack, which saw the passengers dragged from the vehicle and killed by a mob.

The apparent trigger for the attack was the rape and murder of a Buddhist woman a few days earlier in Thandwe district, allegedly by Muslims.

The incidents sparked deadly clashes between the two communities, leaving scores dead and displacing up to 140,000 people – the majority of them Rohingya – as villages were razed.

“The men have been charged with murder because of their involvement in killing people on a bus,” a police official said, declining to be named.

“The court hearing will start on  August 26,” he said, adding the men were all Buddhists and had been arrested after an investigation.

The group was arrested last month and appeared in a local court on Tuesday to hear the charges, an administrative official said, also requesting anonymity.

Rights groups have accused authorities of failing to act as rioting hit mainly Muslim communities in Arakan state and again this year at Meikhtila in central Myanmar where 44 people died by official count.

Myanmar has sentenced more than 20 Buddhists to between two and 10 years in prison for their roles in the Meikhtila riots, while more than a dozen Muslims have been convicted in relation to the violence.

Attacks against Muslims, who make up an estimated four percent of the population, have exposed deep fractures in the Buddhist-majority nation and cast a shadow over its emergence from army rule.

The unrest has also shed light on the treatment of the nation’s estimated 800,000 Rohingya, who are viewed as illegal immigrants from Bangladesh and are denied citizenship.

They are considered by the United Nations to be one of the world’s most persecuted minorities.

The UN this week called for dialogue between the two communities to end mistrust and avoid further violence, as its human rights envoy for Myanmar Tomas Ojea Quintana visited Arakan state. AFP