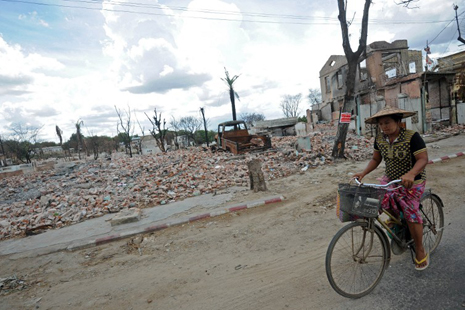 A woman rides past buildings destroyed during the March violence in Meikhtila, Myanmar (AFP / Soe Than Win)

A court in central Myanmar has sentenced four Muslims and six Buddhists to jail terms on various charges of murder and involvement in deadly religious violence in the town of Meikhtila in March, which left dozens dead.

The six Buddhists, one of whom was sentenced on June 28, and the remainder yesterday, are the first to be jailed for the violence. Prior to that, only Muslims had been jailed, including one man who was handed a 14-year sentence for assault.

The disproportionate punishments have led critics to claim the courts were biased in favor of Buddhists.

“We will not condone anyone who was involved in the violence and more detainees arrested in connection with the violence will be sentenced in coming days,” Tin Maung Soe, Meikhtila district chairman, told ucanews.com

Four of the Buddhists were handed seven-year terms for murder, and another two received two years on charges of destroying mosques. All four Muslim defendants were found guilty of the murder of a student during the unrest, and given sentences of between seven years and life imprisonment.

State media said recently that 49 people were on trial for murder, with scores more facing the court for their role in the riot.

Nearly 40 Buddhist detainees have however been acquitted because of lack of evidence, according to Tin Maung Soe.

Aye Lwin, a local Muslim religious leader in Meikhtila, declined to comment on the sentences handed to the Buddhists for fear of reprisal from the local majority Buddhist population, but said: “As the Muslim holy Ramadan period has begun, Muslims would not have the chance to make three prayers in a day because of the curfew which begins at 9pm every day.”

Human rights groups have accused the local police of being slow to stop the killings, and activists have called on the government to fully investigate and prosecute those responsible for the rioting. Myanmar Muslim gets 26 years in jail