Complaints over unfairness resulting from mob intimidation of courts 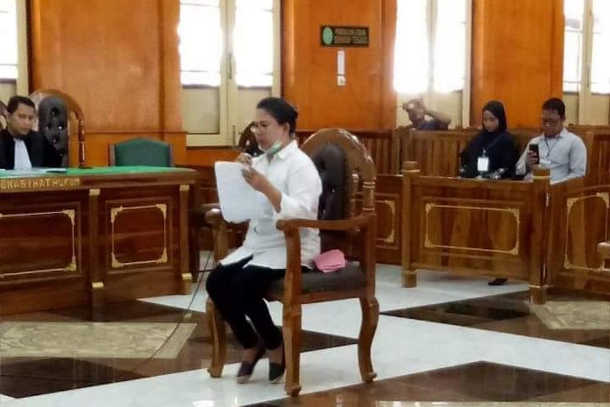 Meliana, a 44-year-old Buddhist woman, during her blasphemy case which resulted in her being sentenced to 18 months in prison for complaining about the volume of adzan (the Islamic call to prayer) from a speaker of a mosque near her house in Tanjung Balai, North Sumatra province. (Photo is supplied by Ranto Sibarani)

Meliana, a 44-year-old Indonesia Buddhist woman, wept after she was sentenced to 18 months in prison.

On Aug. 21, the Chinese-Indonesian mother of four was found guilty by the Medan District Court in North Sumatra province of blasphemy under the nation's criminal code.

It all began in mid-2016 when she told a neighbour that the volume of adzan, the Islamic call to prayer, from a speaker of a mosque near her house in Tanjung Balai town had become too loud.

Unexpectedly, about a week later, an angry Muslim mob threw rocks at her house and burned it after her chat with the neighbour, who owned a small stall, became known among mostly Muslim locals.

Ranto Sibarani, a lawyer representing Meliana, said the stall's owner told relatives about the complaint, leading to a social media message alleging an attempt to ban the amplified call to prayer.

Offended Muslims burned several Buddhist temples in the town as a response, resulting in eight perpetrators being sentenced to between one and five months in jail.

"She and her family couldn't live peacefully following the attacks," Sibarani said.

"Her husband even lost his job."

On May 30, Meliana was arrested by local police and her trial resulted in her prison sentence.

Meliana isn't alone. Dozens of people have been sentenced under the criminal code's blasphemy provisions, which carry a maximum punishment of five years in prison.

The tough penalties were based on a presidential decree on the prevention of religious abuse and defamation, known as the blasphemy law. This regulation was passed in 1965 by the country's first president, Soekarno.

The law was seen as accommodating requests from Islamic organizations to prohibit mystical indigenous beliefs, which they believed could tarnish other more established religions in the country.

According to the Jakarta-based Setara Institute for Democracy and Peace (SIDP), 97 cases of claimed blasphemy were recorded between 1965 and 2017.

Of this number, 76 cases were brought to court and the rest were dealt with non-judicially.

Most of the cases put before a court followed public agitation.

Meanwhile, data from Amnesty International Indonesia shows that 12 people were convicted under the regulations last year and 106 others convicted between 2005 and 2016.

Among them was former Jakarta governor Basuki 'Ahok' Tjahaja Purnama, an ethnic Chinese Christian who was sentenced in May last year to two years in prison after he was found guilty of insulting the Quran.

Hendardi, chairman of SIDP, said imprisoning of Meliana was unfair because mob pressure was applied to judges of the District Court.

"Injustice and improper law enforcement for blasphemy cases in Indonesia indicates that the blasphemy law must be reformed immediately," he said.

Robikin Emhas, who heads the legal division of the country's largest Islamic organization, Nahdlatul Ulama, said he could not see how saying adzan was "too loud" could be construed as an expression of hatred or hostility toward a particular group or religion.

For him, Meliana's chat with her neighbour did not constitute blasphemy as defined by the criminal code.

"Such expression should be seen as a constructive criticism in a plural society," he said.

"I hope law enforcement officers will refrain from using the blasphemy article as an instrument to suppress freedom of expression."

Abdul Mu'ti, secretary of the second largest Islamic organization in the country, Muhammadiyah, said the sentencing of Meliana was too severe and flowed from mass pressure rather than facts that emerged at the trial.

He called for an in-depth review of the blasphemy law.

Meanwhile, Reverend Gomar Gultom, general secretary of the Communion of Churches in Indonesia, believed that Meliana's complaint should not have been subjected to sanction as it was delivered in a polite way.

A challenge to face

Ahok's case is an example.

Rallies demanding that he be arrested for blasphemy intensified after the council issued a statement saying that Ahok's remarks insulted both the Quran and ulemas.

Meliana does not accept the verdict in her case and lawyers will appeal the ruling despite intimidation they may face from Muslim hardliners.

"After Meliana, there will be similar cases," Sibarani said.

"At the same time, hatred is maintained."