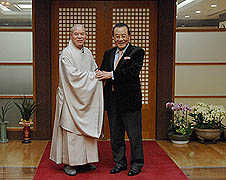 A Protestant leader has met with a senior figure from Korea’s Buddhist Jogye order, in an effort to diffuse ongoing tensions between the two faiths. Reverend Kiel Ja-yeon, the newly elected president of the Christian Council of Korea (CCK) met the Jogye Order’s chief executive Venerable Jaseung yesterday during a courtesy call, to try to reach some kind of mutual understanding. The Jogye Order of Korean Buddhism is the country’s largest Buddhist denomination. Protestant-Buddhist relations have been strained over the past few years and recent barbs have been exchanged over temple/church stay schemes for the faithful. Reverend Kiel said he made yesterday’s visit to clear up any misunderstandings over his “church stay” project. “As the temple stay scheme aims to spread the faith and spirituality of Buddhism to people, our church stay aims to express the faith and spirituality of Christianity,” he said. “Some saw our project as a reaction against the temple stay, but that is wrong,” he added. Venerable Jaseung in turn sought to explain to Reverend Kiel the purpose of the temple stay. “It’s not a Buddhist mission program. It is to provide education on Korean tradition, history and culture,” he said. “We don’t object to the church stay project. Buddhists are not worried about Protestant mission projects,” he added. Venerable Jaseung hoped Reverend Kiel would play an important role in the CCK and Reverend Kiel promised not to provoke Buddhists. Meanwhile, a Jogye Order official told ucanews.com today that recent Buddhist criticism of the government was a result of religious bias by the government in favor of Protestants, not a criticism of Protestantism itself. “Some fundamentalists slander Buddhism, but they are small in number. There is no religious conflict between Buddhism and Protestantism,” he said.   Related eport Tolerance can diffuse Buddhist-Protestant tension   KO13070.1638