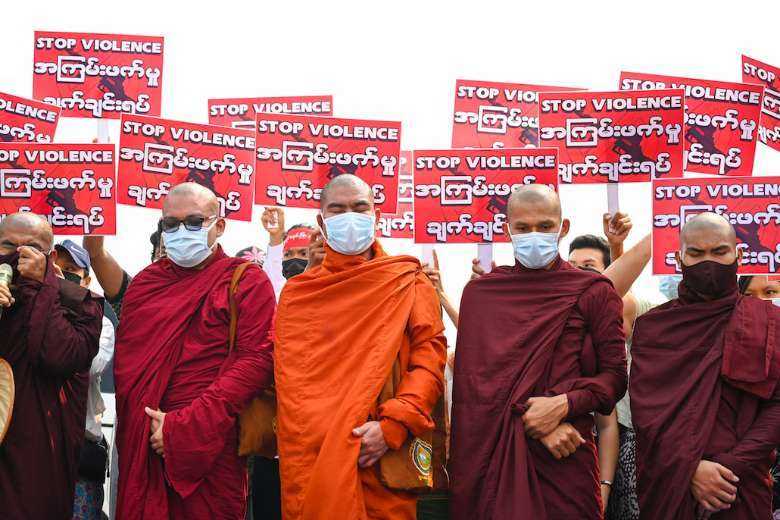 Buddhist monks stand in front of protesters during a demonstration against the military coup in Yangon's Hlaing Tharyar township on March 14. (Photo: AFP)

Since the beginning of civil resistance against the Feb. 1 coup, Buddhist monks in Myanmar have made their presence felt in anti-government protests but are fewer in number compared with the 2007 Saffron Revolution which they themselves initiated.

Some Buddhist clergy support the military, which staged the coup, while others are siding with the pro-democracy youth.

Monks’ participation turned fatal on March 13 with the death of a monk in Mandalay, the second-largest city in the country.

Other religious communities, including Christians, are also at the forefront in the fight to restore democracy in the Southeast Asian country.

At least 39 people died on March 14 on the bloodiest day since the coup, with rights groups registering at least 180 deaths since the protests began.

But where are the monks?

Many monks are present in the anti-military demonstrators daily, but unlike the Saffron Revolution, named after the color of monks’ robes, they are not the leaders this time.

"The context is very different," says Professor Ashley South, a researcher at Thailand’s Chiang Mai University who specializes in Myanmar.

"In 2007, the monks initiated the movement because, under the military dictatorship, no one else could do it. In addition, the trigger for the unrest was economic as the reforms initiated by the military threatened the resources of ordinary people, precisely those who feed monks.”

As in all Southeast Asia, Buddhist monks and civil society are intimately linked (most Buddhist men are monks at some point in their lives).

Burmese monks are regularly part of street protests across the political spectrum — from the most xenophobic conservative nationalism, such as the notorious monk Wirathu who led anti-Muslim protests in 2017, to the liberalism displayed by Aung San Suu Kyi's National League for Democracy (NLD) party.

Yet the monastic code of life to which they are subjected, the Vinaya, theoretically prohibits them from taking part in political demonstrations or even voting.

"The 2007 movement was an exception," says South. "There is now a cliché, almost postcard-like, attitude towards monks leading social movements in Burma. But most of them have gone back to meditate.”

Although the Sangha, the community of Buddhist clergy, is far from being politically monolithic and has the same generational and social divisions as civil society, it is nevertheless undeniable that some monks, including monastery chiefs, support the military.

A few days before the coup, monks demonstrated in the capital Naypyidaw and Rangoon, denouncing alleged fraud in last November's election, echoing the military’s official line.

In the weeks leading up to the coup, General Min Aung Hlaing, the general who seized power, increased his visits and donations to important monasteries, and on Feb. 8, in his first speech to the nation, he announced as one of the first measures of the military government the "reopening of pagodas throughout the country for public use.”

Emblematic pagodas such as the Shwedagon in Yangon or Mahamuni in Mandalay had been closed for several months due to Covid-19.

It is also worth noting that the general-in-chief, very quickly after the coup, visited Cardinal Charles Maung Bo, archbishop of Yangon, offering medical equipment.

The visit did not prevent the cardinal from calling for the release of all political prisoners and denouncing "the brutality of the military dictatorship.”

"Some monks, especially those who benefited most from the Buddhism-state-army association, may have felt threatened under Aung San Suu Kyi's government," says Khin Mar Kyi, a researcher at Oxford University and a former activist in the 1988 anti-coup movement.

"Until recently, being Burmese was strictly equivalent to being a Buddhist. In school, we were even taught that Buddha was Burmese and that the city of Varanasi [or Benares, in India, where Buddhism was founded] was in Burma."

But the increasing visibility given to minorities, the liberalization of morals and a youth that is less focused on religious issues have led some monks to believe that a government led by the NLD is incapable of protecting Myanmar’s identity and its Buddhist specificity.

Plans to cut the budget of the ministry of religious affairs, including funding for monastic universities, further convinced them.