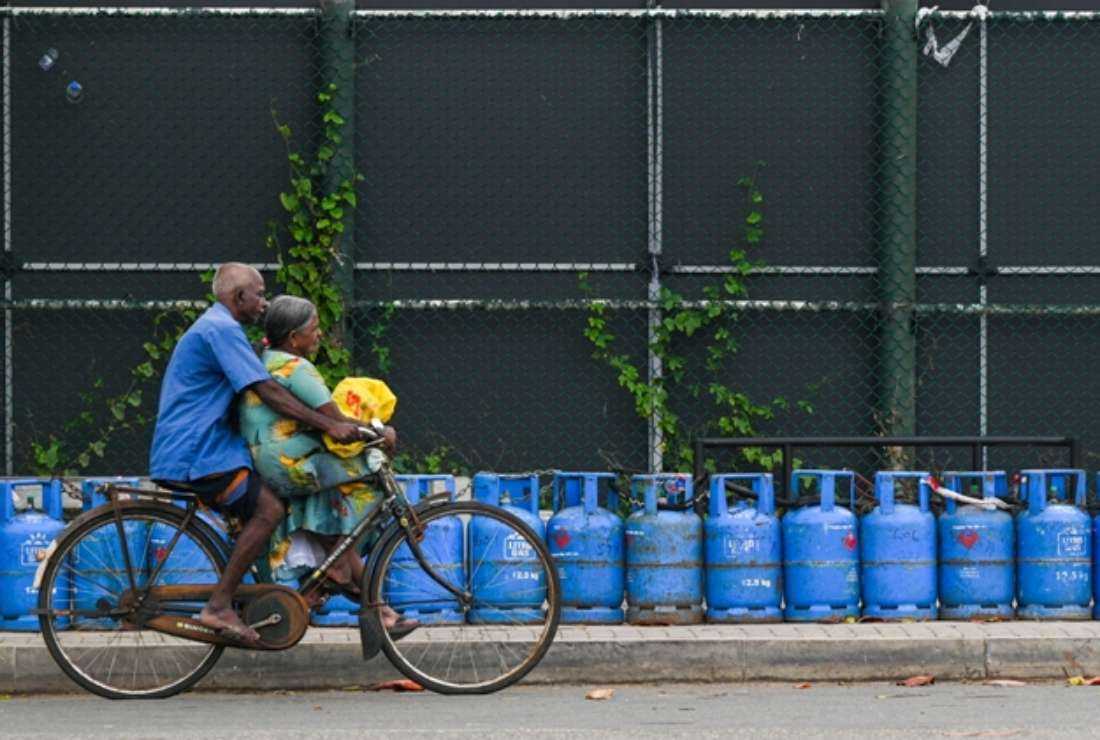 A Sri Lankan couple cycles past a row of liquefied petroleum gas (LPG) cylinders placed by people queueing to buy fuel amid the worst economic crisis, in Galle on July 4. (Photo: AFP)

Four leading Buddhist monks in Sri Lanka have called on the government to stop playing political tricks and appoint an all-party government to help the country get international aid and ease the worst economic crisis in its history.

“Stop the political misbehavior and be honest and appoint an all-party government by bringing together all the political parties for a period of six months," the religious leaders said in a July 2 statement.

In April, President Gotabaya Rajapaksa agreed to form an all-party government under a new prime minister after nationwide protests forced his brother, Mahinda Rajapaksa, to resign as premier on May 9.

An interim-government was appointed on May 16 under new Prime Minister Ranil Wickremesinghe. But all his cabinet ministers, except three, are from the Rajapaksas’ party.

The Rajapaksa family leads the Sri Lankan PodujanaPeramuna (SLPP) party, which won a landslide in the 2020 parliamentary election. Gotabaya Rajapaksa is perceived to be delaying an all-party government to remain in control of the government at least until his term ends in 2024.

The Buddhist monks accused him of playing political games and asked for sincere “efforts to find solutions to the political and economic difficulties of the country.”

The protests against the Rajapaksa family and the government intensified at the end of March. Hundreds continue shouting slogans day and night close to the presidential secretariat demanding the resignation of the president and his ministers.

The protesters accuse the powerful Rajapaksa family of mismanaging the economy and want them to quit.

"The government’s attempt to suppress public opposition has become a serious crisis,” as it has blocked the government from receiving “international aid in the background of so much expectation" from the people, said the monks.

Political analysts and religious leaders say a clear and transparent change of government is important to gain the trust of the international community and to seek and get aid.

Cardinal Malcolm Ranjith of Colombo says appointing new ministers from the same party cannot be accepted as the move is aimed at deceiving the public.

"Due to the lack of fuel, even ambulances cannot bring sick people to the hospital"

The country is reeling from an unprecedented economic crisis as its foreign exchange is reportedly less than a million dollars. Sri Lanka has to repay US$7 billion in foreign debt this year, and another $25 billion by 2026.

The monks said, "every representative of the people should understand the depth of the crisis and put aside positions, privileges, power, and stand up for the people's right to live without clinging to selfish and insensitive narrow political theories."

The monks wanted the president to hand administration over to a panel of all parties represented in parliament, with the freedom to elect its leader.

The economic crisis has hit all spheres of life in the form of food, petrol and diesel shortages in a country that depends on imports for most of its needs.

Several schools and universities have been closed until further notice as students cannot travel because they cannot get fuel for their vehicles to travel.

"Due to the lack of fuel, even ambulances cannot bring sick people to the hospital. Inflation is increasing beyond what people earn," said Father Jeewantha Peiris, an activist, who joined the protest for a change of government.

The people's struggle has now turned into “a terrible tragedy due to the fuel crisis,” he told UCA News on July 3.

"Everyone should take to the streets very soon to kick out the corrupt government. The country needs freedom and liberation. We can no longer live divided, enslaved and go to the streets for justice," said Father Peiris. "People should go into the streets with the power of the spirit of religions."

RONA
As you sow,you reap.The harvest is bitter. The culprits must go by choice or force.
Reply