Thich Nhat Hanh, the monk and peace activist who brought mindfulness to the West, was 95 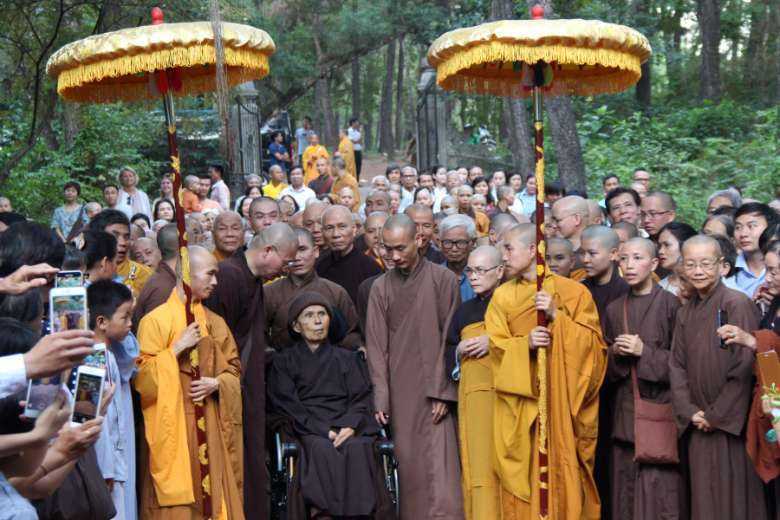 Vietnamese Buddhist monk Thich Nhat Hanh (center, in a wheelchair) with a group of monks at the Tu Hieu Pagoda in Hue, in this file photo taken on Oct. 28, 2018. (Photo: AFP)

The Zen master, whose reach within Buddhism is seen as second only to the Dalai Lama, spent nearly four decades in exile after being banished from his homeland for calling for an end to the Vietnam-American War.

"We invite our beloved global spiritual family to take a few moments to be still, to come back to our mindful breathing, as we together hold Thay in our hearts," the organisation said on Nhat Hanh's Twitter account, using the Vietnamese word for teacher.

Before his return to Vietnam in 2018, he set up retreats around the world and wrote over 100 books including on mindfulness and meditation -- a cornerstone of a $4.2 trillion global wellness industry espoused by Oprah Winfrey, Arianna Huffington and tech billionaire Marc Benioff.

Born in 1926, Thich Nhat Hanh was ordained aged 16 and went on to found a youth school which trained volunteers to build clinics and infrastructure in villages blighted by war.

In the early 1960s he travelled to the United States, where he taught at Columbia and Princeton universities, but after one trip in 1966 to meet US civil rights icon Martin Luther King -- who joined his calls to end the Vietnam-American War -- he was barred from returning home.

Believing that war was fundamentally wrong, the monk refused to take sides in the conflict and was consequently persecuted by the governments of both North and South Vietnam.

Thich Nhat Hanh spent the next 39 years in France, but continued to advocate for religious freedom around the world.

In 1967, King nominated Thich Nhat Hanh for the Nobel Peace Prize, telling the committee in a letter: "this gentle Buddhist monk from Vietnam is a scholar of immense intellectual capacity".

"His ideas for peace, if applied, would build a monument to ecumenism, to world brotherhood, to humanity."

He also continued to help his fellow Vietnamese.

As the war came to an end, many fled the country by boat, facing perilous conditions on the ocean as they attempted to reach sanctuary overseas.

Thich Nhat Hanh was able to save more than 800 people after he hired two large boats.

Such action was part of his belief in "engaged Buddhism", a term which he coined, according to John Powers, a professor of religious studies at Australia's Deakin University.

"One of the problems historically with Buddhism is that Buddhists have been really good about talking about compassion... but (they) have not been that great at putting it into practice," Powers said.

But Thich Nhat Nanh believed "it's not enough to sit on a cushion and meditate... and that's become a real cornerstone of a lot of modern Buddhism".

He was permitted by authorities to see out his final days at the Tu Hieu temple, but was closely monitored by plainclothes police who kept vigil outside his gated compound.

Since his return to Vietnam, hundreds flocked to his pagoda to join the monk on his outings around the temple's lush gardens.

Most of his followers are devoted to his spiritual messages, not his politics.

"He taught us to love people, to love ourselves, to love nature," said Tran Thi My Thanh, who made the pilgrimage to Hue with friends from Ho Chi Minh City.

His messages have not always been welcomed as authorities in Buddhist majority one-party Vietnam are wary of organised religion: in 2009 his followers were driven from their temple in southern Lam Dong province by hired mobs.

But Thich Nhat Hanh's disciples say they come in peace.

"We know that Vietnam has difficulty, and we know the world also tries to help Vietnam open up, to have more freedom, more democracy... we try to help also, but we do it in a Buddhist way," said Thich Chan Phap An, one of Thich Nhat Hanh's closest disciples.

"It's not wise to have confrontation, but it's very good to have communication," he told AFP in 2018.