Claim ancient monastery must be stripped of all Muslim buildings 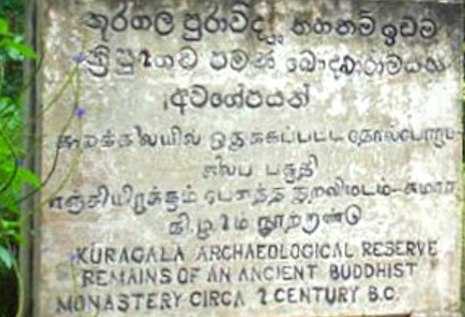 A government sign outside the Kuragala complex. (Photo by Wikimedia Commons)

Police and Buddhist protesters clashed in the town of Balangoda on Saturday after members of the hardline Sinhala Ravaya group demanded that an ancient Buddhist archaeological site be cleared of all Muslim structures.

Police fired water cannons at the protesters, who held their demonstration in spite of an injunction aimed at preventing further flare-ups at the historic Kuragala religious site.

Magalkande Sudantha Thero, a monk and the convener of Sinhala Ravaya, said hundreds of protesters including dozens of monks were attempting to enter the rock temple to “remove illegal Muslim constructions”.

“We appealed to government officials to remove illegal constructions before April 4 but they ignored us. Therefore as Buddhist monks we have a right to protect Buddhism since this is a Buddhist country,” Sudantha Thero told ucanews.com.

According to Muslims, the cave is a holy meditation site of one of Islam’s greatest saints, Sheikh Mohiyadeen Abdul Qadir Jilani.

Sym Saleem Been, a member of the Dambulla Mosque committee, said Sinhala Ravaya’s demands were pointless. In 2012, Buddhist protesters firebombed and stormed the Dambulla mosque, claiming it was an illegal structure on a sacred Buddhist site.

“There is no Buddhist temple or even a Buddhist statue at Kuragala,” Been pointed out. “This beautiful ancient mosque remains in its current location and it holds great significance for Muslims all over the country.”

Tensions between Buddhists and Muslims have been rising in recent years amid outgrowth of radical Buddhist groups. Last June, four Muslims were killed and more than 150 people injured after the hardline Bodu Bala Sena launched attacks on Muslim majority coastal towns.

The cabinet is working on a draft bill that would hand down harsh punishment for those found guilty of hate speech, particularly that which leads to violence.