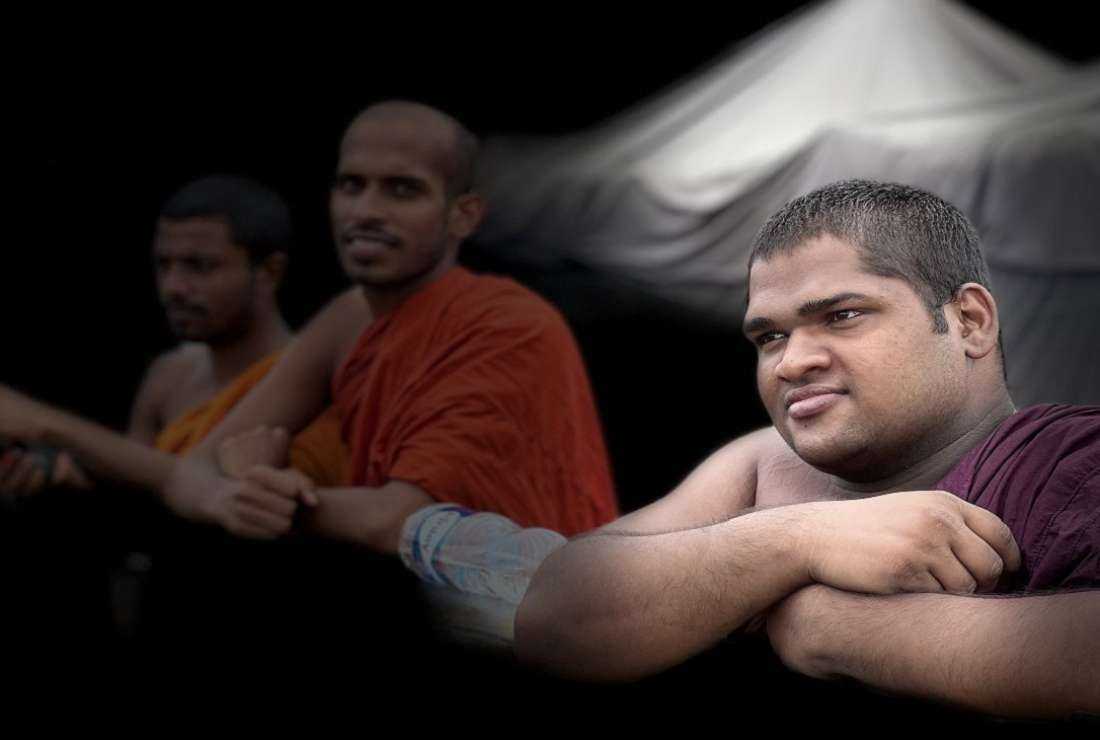 Buddhist monks gather outside the Presidential Palace in Colombo. Buddhist clergy have played a key role in seeking a solution to the crisis. (Photo: UCA News)

Sri Lanka’s Buddhist clergy has prepared a list of five civil activists as potential candidates for the next president, as sitting members of parliament continue to lobby for the position ahead of a secret ballot slated for July 20.

Moves to put together an All-Party Government were accelerated as media reports said President Gotabaya Rajapaksa on Wednesday fled to the Maldives on a military jet, hours before he was supposed to step down in the face of a public revolt against him and his family for mishandling the economy.

Ven. Omalpe Sobitha Thera told journalists the names would be put forward if politicians failed to reach a consensus on finding a replacement for Gotabaya Rajapaksa who has said he will resign in response to last weekend’s massive street protests.

“The future president should be chosen with a common agreement from all political parties and based on the national needs,” he said, adding all party leaders need to leave their power struggles behind.

“If they cannot do so, we are ready to nominate five civil activists suitable for the position,” he said. “In such case, we request party leaders allow them to be nominated through the national list in place of five MPs.”

The clergy declined to name their five nominees saying they did not want to “embarrass them” but the potential list was announced as a three-way battle emerged for the presidency.

Those cited include Dullas Alahapperuma, from Rajapaksa’s ruling Sri Lanka People’s Front, Sajith Premadasa, leader of the opposition Samagi Jana Balawegaya, and Ranil Wickremesinghe, who tendered his resignation as prime minister alongside Rajapaksa.

Rajapaksa was expected to formally stand down today and opposition to Wickremesinghe taking up the position as president is mounting amid efforts to establish an All-Party Government.

Anura Kumara Dissanayake, leader of the Janatha Vimukthi Peramuna, warned any attempt by Wickremesinghe to become president would only further aggravate unrest across the country amid the economic collapse.

“We have had enough chaos and unrest for the last few months,” he said in a statement. “Every sector of the country is crippled now. It is the responsibility of the president and the prime minister to pay heed to the demand of the people and avert any more crisis.”

Others in the mix for potential leadership positions include retired field marshal Sarath Fonseka, who previously contested the presidency representing a coalition of parties, and Mathiaparanan Abraham Sumanthiran from the Tamil National Alliance.

Meanwhile, a travel ban has been sought through the Supreme Court against Rajapaksa, members of his family and the ousted government after former finance minister Basil Rajapaksa, brother of Gotabaya, and family head Mahinda Rajapaksa attempted to flee the country for the US via Dubai.

His exit was thwarted by immigration and customs officials following protests by passengers at Colombo International Airport. The whereabouts of Gotabaya remain unknown.