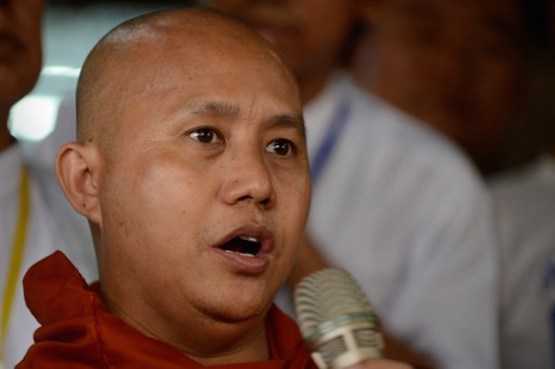 Myanmar hard-line Buddhist monk Wirathu speaks to followers on the outskirts of Yangon in this June 4, 2016 file photo. (Photo by Romeo Gacad/AFP)

Religious authorities in Myanmar's Mandalay have warned the outspoken and controversial leader of an ultra-nationalist Buddhist movement to not give sermons under a one-year ban on making public speeches because of his repeated hate speech and anti-Muslim rhetoric, a religious official said March 20.

The Mandalay Sangha Maha Nayaka Committee informed Wirathu, vice chairman of the Ma Ba Tha Buddhist organization, that if he does not follow an order issued by the State Sangha Maha Nayaka (Ma Ha Na), it will take action against him, committee secretary Razeinna told Radio Free Asia.

The State Ma Ha Na is a government-appointed body of high-ranking Buddhist monks that oversees and regulates the Buddhist clergy in Myanmar.

On March 10, the Ma Ha Na barred Wirathu, who frequently speaks out against Muslims, from making public speeches for one year because he "repeatedly delivered hate speech against religions to cause communal strife and hinder efforts to uphold the rule of law," according to a statement issued by the religious body.

The statement did not state what punishment he would receive.

"We called U [honorific] Wirathu and read him the order from the State Sangha Maha Nayaka Committee's order and asked him to sign that he is aware of it because he said he didn't know the committee had banned him from making sermons," said Razeinna.

"We told him that we will take action against him if he doesn't follow the order from the State Sangha Maha Nayaka," he said.

After the ban was issued, Wirathu attended sermons in Ayarwaddy and Mandalay regions and northern Myanmar's Kachin State where he stood with his mouth taped shut in protest against the order.