Crackdown on press symptomatic of a nation in decline 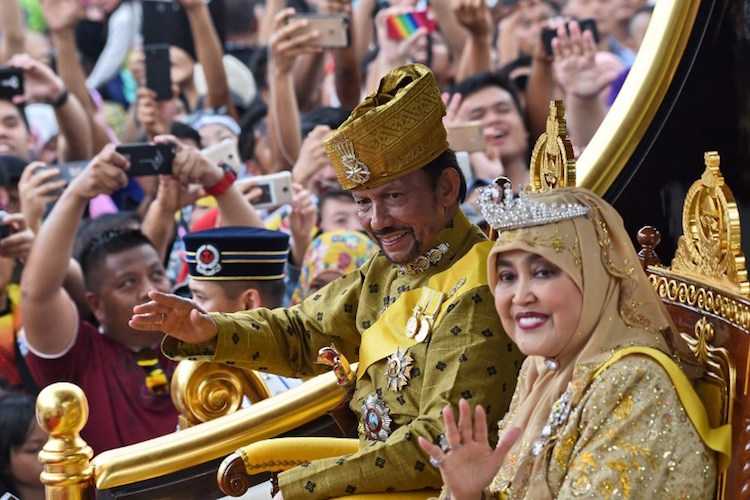 Brunei's Sultan Hassanal Bolkiah and Queen Saleha ride in a royal chariot during a procession to mark his golden jubilee in Bandar Seri Begawan on Oct. 5, 2017. (Photo by Roslan Rahman/AFP)

Oil wealth has delivered much for Brunei, guaranteeing high standards of living and economic independence, which has enabled the tiny sultanate to pursue it's own political and religious agenda.

But that independence is being challenged by dwindling oil reserves with oil and gas production expected to run out within the next 20 years prompting Brunei's ruler, Sultan Hassanal Bolkiah, to initiate economic reforms and seek foreign investment.

Reports have emerged that China has pumped as much as US$6 billion into the enclave while the American Enterprise Institute's China Global investment tracker put that figure at $4.1 billion. More is coming from Saudi Arabia, enormous figures for Bolkiah whose subjects number just 440,000.

This has led to speculation that in return Brunei will remain quiet on the maritime dispute in the South China Sea and is prepared to bend towards Saudi, and Wahabi, interpretations of Shariah often cited for inflaming jihads.

Chinese expansionism into the South China Sea, known as the East Sea in Hanoi and the West Philippines Sea in Manila, has undermined unity within the 10-member Association of South East Asian Nations (ASEAN), split by Cambodia and Laos support for Beijing.

Brunei staked its claim in the disputed sea in 1984 over maritime features that include Bombay Castle, Louisa Reef, Owen Shoal, and Rifleman Bank, which are located within its 200 kilometre Exclusive Economic Zone (EEC).

Its only physical claim is Louisa Reef, in the Spratly chain, which is also claimed by China and Vietnam. Both have maintained a military presence in the area where Brunei, which traditionally remains quiet on contentious issues, does not.

But it has held the potential to punch above its political weight and position itself as a voice of reason where it counts; in the diplomatic arena where the Philippines, Vietnam, Malaysia and Indonesia are at odds with Chinese maritime ambitions.

However, Ahmed Mansoor, a pseudonym for a former Brunei-based journalist, recently wrote that government revenue fell by 70 percent between 2013 and early 2016. Then Brunei signaled what might come as it backed an "important consensus" with Cambodia, Laos and China; that the dispute must not be allowed to affect relations between Beijing and ASEAN.

Revenue falls have also resulted in drastic spending cuts and unemployment is at worrying levels. Writing for publications including the highly reputable Nikkei Asian Review, Mansoor added: "In exchange for US$6 billion of Chinese investment into an oil refinery and local infrastructure, along with promises to boost trade and agricultural cooperation, Brunei has remained silent on Beijing's territorial claims in the South China Sea, refusing to criticise its biggest investor even though it has overlapping claims."

Saudi Arabia has also stepped into the fray, with a historic visit by King Salman bin Abdulaziz aimed at deepening its ties in the Islamic world with shared religious values seen as a cornerstone, underpinning important issues like counter terrorism, in promoting tourism as a major economic pillar, and in serving mutual interests on world oil markets.

Saudi also sees Brunei as a strategic center, which can be used to strengthen its ties with China and its expansion across East Asia following the United States withdrawal from the Trans-Pacific Partnership (TPP).

Saudi is a keen supporter of Shariah in Brunei, which includes tight controls on other religions. Brunei has previously banned Christmas and requires Christians to provide advanced notice before celebrating festivals.

However, adherence to Shariah has not always been a strong point, even within royal circles. Young princes have too often been spotted in the casinos and fashionable bars of London, and much of the oil wealth has been frittered away.

A London court was once told how Mariam Aziz, a former wife of the sultan lost half-a-million pounds gambling in local casinos. She denied dropping three million pounds in a single gambling spree.

Prince Azim — known as the 'Playboy Prince' — likes to host New Year's Eve parties at places like the five-star Dorchester Hotel with celebrities like Jerry Hall, Sophia Loren and Faye Dunaway. Mariah Carey was once reportedly paid about 900,000 pounds to sing Auld Lang Syne, among other numbers.

Both China and Saudi have sought to control, or at least influence the press in Brunei when it suits them. Reporters Without Borders ranked Brunei in  lowly 153rd spot on its 2018 World Press Freedom Index, noting authorities sometimes intervene.

"But in most cases the repressive legislation, rendered even harsher by the introduction of a very strict version of Shariah, suffices to deter any comments that could be interpreted as blasphemy or criticism of the sultanate. In 2017, several religious leaders called for tougher censorship measures in order to address what they called moral decadence."

Saudi has stepped in when Riyadh has been criticised over issues like the Hajj and oil prices, and Mansoor noted that: "Even critical local press reports were enough to trigger protests from the Chinese embassy, which pressured the government to tighten controls."

The Brunei Times, an English-language newspaper, was forced to disable its reader's comment section on its website and docile, government friendly publications are being further pressured to censor all criticism with existing repressive media laws made all the more restrictive by potential blasphemy or lese-majeste charges.

Any person perceived as a threat to the state can be jailed indefinitely without trial under the Internal Security Act and people complaining on social media have been warned they too could be prosecuted. Sadly, this type of attitude is repeating itself across Southeast Asia, denying people their right to be heard.

Fabulous oil wealth backed extraordinary lifestyles for a few in Brunei. But it was that wealth that also enabled the sultanate to punch above its weight at the diplomatic table on matters of regional importance — independent of foreign financial influence and competing agendas — especially in the messy and potentially dangerous dispute amid the international shipping lanes of the South China Sea.

Luke Hunt is the opinion editor for ucanews.com and author of 'Punji Trap,' a historical account of Vietnam and the wars of the 20th century. He can be followed on Twitter @lukeanthonyhunt