Adulterers can be stoned to death, limbs can be severed for theft 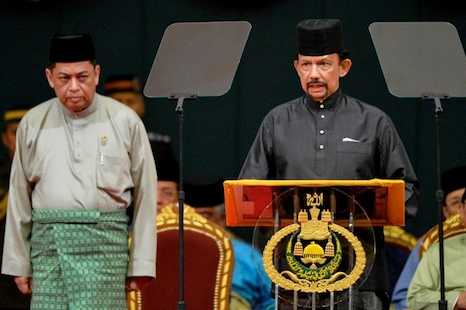 The Sultan of Brunei introduced tough Sharia-law punishments on Tuesday including death by stoning for crimes such as adultery, hailing what he called a "historic" step toward Islamic orthodoxy for his sleepy country.

Sultan Hassanal Bolkiah -- one of the world's wealthiest men -- said a new Sharia Penal Code in the works for years was officially introduced Tuesday in the tiny, oil-flush sultanate and would be phased in beginning in six months.

Based on individual cases, punishments could include stoning to death for adultery, severing of limbs for theft, and flogging for violations ranging from abortion to alcohol consumption, according to a copy of the code.

The code applies only to Muslims.

"By the grace of Allah, with the coming into effect of this legislation, our duty to Allah is therefore being fulfilled," the sultan, 67, said in a speech.

An absolute monarch whose family has tightly controlled the languid, oil-rich country of 400,000 for six centuries, the sultan first called in 1996 for the introduction of Sharia criminal punishments.

The sultan already imposes a relatively conservative brand of Islam on his subjects, compared to Brunei's Southeast Asian Muslim neighbours, Malaysia and Indonesia.

Brunei bans the sale and public consumption of alcohol and closely restricts other religions.

But Sharia has been a rare point of contention in a land where the sultan's word is unquestioned, with many Bruneians quietly grumbling that the concept is out of step with the affluent country's laid-back ethnic Malay society.

"These rights-abusing policies are a good indication of why modern democracy and the right of people to participate in their government is a much better idea than anachronistic absolute monarchy," said Phil Robertson, deputy Asia director for Human Rights Watch.

The situation shows that "respect for basic civil and political rights is near zero in Brunei," he added.

The monarch himself has acknowledged concerns over Sharia in recent years as the code was being drafted.

It was not immediately clear how aggressively it would be enforced.

Two years ago, the Attorney-General's office promised Brunei would apply an extremely high burden of proof for Sharia cases and judges would have wide discretion in applying it, in comments apparently aimed at easing public fears.

"It seems almost incompatible with Malay culture, which is peace-loving," said Tuah Ibrahim, 57, driver of a boat taxi in the capital Bandar Seri Begawan.

He said Sharia can be acceptable if proportionate to the crime, but adds: "I can't imagine our country turning into somewhere like Saudi Arabia."

Brunei already has a dual system combining civil courts based on British law -- the sultanate was a British protectorate until 1984 -- and Sharia-compliant courts limited to personal and family issues such as marriage and inheritance.

Nearly 70 percent of Brunei's people are Muslim ethnic Malays. About 15 percent are non-Muslim ethnic Chinese, followed by indigenous tribes and other groups.

Bankrolled by South China Sea oil and gas fields, Brunei has one of Asia's highest standards of living, including free medical care and education through the university level.

The monarch's wealth -- estimated at $20 billion by Forbes magazine two years ago -- and luxurious lifestyle have become legendary, with reports emerging of his vast collection of luxury vehicles and gold-bedecked palaces.

The monarchy was deeply embarassed by a sensational family feud between Hassanal and his younger brother Jefri Bolkiah over the latter's alleged embezzlement of 15 billion dollars during his tenure as finance minister in the 1990s.

Subsequent court battles and exposes revealed salacious details of Jefri's un-Islamic jet-set lifestyle, including allegations of a high-priced harem of Western paramours and a luxury yacht he owned called "Tits."

Despite a suave image overseas, the sultan repeatedly warns at home of the potential impact that increasing integration with the world could have on Brunei's moral values and has leaned towards Islamic orthodoxy of late.

In the past year, the government introduced mandatory religious education for all Muslim children and ordered all businesses closed during Friday prayers.

In his speech, the sultan appeared to try to assuage any international concerns that may arise, saying the Sharia change "does not in any way change our policies ... as a member of the family of nations." AFP