Breaking the silence on domestic violence in Indonesia

Victims are speaking out in greater numbers, new report suggests 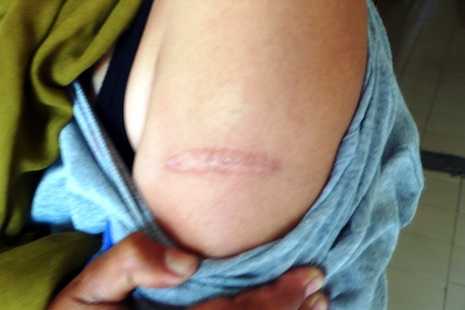 When her husband kicked her in the face after she refused to give him money, Mariyati (not her real name) – three months pregnant at the time – had no idea that this was just the start of a cycle of abuse that would last for more than two decades.

In subsequent years, her husband cut her with a machete and hit her in the face with a hammer, which caused her lip to split and dislodged one of her front teeth – this in response to seeing her speak to a male co-worker.

During 22 years of marriage, Mariyati – a garment worker in Tanjung Priok in North Jakarta – endured numerous attacks of varying degrees of severity, and she chose to endure the beatings and injuries in silence.

“I would suffer more if I screamed, so I chose to keep silent,” she says, adding that her husband did not seem ashamed of his treatment of her, but rather took pride in it.

“One thing that confused me was that he always told me to go out to a nearby market to buy something after he hurt me. I thought he wanted our neighbors to know that I had injuries because I had disrespected him.

Mariyati is one of thousands of women who suffer domestic violence in Indonesia, according to a recent report by the National Commission of Violence against Women (Komnas Perempuan.)

Komnas Perempuan, which issues the annual report on violence against women to coincide with International Women’s Day on March 8, says the actual number of cases is likely to be much higher.

“This increase [from 2012] indicates that women are more confident in speaking out,” said Justina Rostiawati, a commissioner with Komnas Perempuan.

“But it doesn’t really mean that the previous year’s cases were actually fewer because there might have been many victims who were unable to speak out.”

There are a number of psychological or economic reasons why some women refuse to report their husbands to the police, says Uli Arta Pangaribuan, a lawyer from the Legal Aid Foundation of the Indonesian Women’s Association for Justice.

“Their husbands get mad if they do that. They also don’t get much support from their families because reporting their cases means giving a bad name to their families.”

As part of its advocacy for judicial improvements and gender equity, the Legal Aid Foundation also operates a shelter for victims of domestic violence who have decided to press charges against their husbands or sue for divorce.

Pangaribuan acknowledged that reporting abuse claims or initiating divorce proceedings does not always deter additional violence, and that there are several factors to be considered in filing such claims.

“We give a choice to our clients,” Pangaribuan said, adding that victims must consider not only their own safety but also the future of their children when they come forward.

Mudjiati, a deputy on the women’s protection desk at the Ministry of Women’s Empowerment and Child Protection, said that the rise in the number of domestic violence cases could be linked to a growing understanding of legal mechanisms available to victims.

Indonesia passed the Elimination of Domestic Violence law in 2004, and since that time Mudjiati says that “society understands what domestic violence is … [and] there’s progress in their understanding of human rights”.

But Mudjiati acknowledged that more needed to be done to protect women.

“Society’s awareness needs to be improved. Some people tend to think that domestic violence – when there’s hitting – is just a family affair and must not be reported. In fact, it’s a criminal offense.”

It was just such awareness on the part of Mariyati’s co-workers at the garment factory that convinced her to take action.

“If you died, how could we help you? You have to make a move,” Mariyati, now 45, said, quoting her co-workers.

In June last year, she left her husband and took refuge for three months in the secretariat of the Inter-Factory Labor Federation in North Jakarta.

Mariyati later rented a home for her three children, who now reside with her husband pending divorce proceedings.

“I’m not afraid at all. I’ve already made up my mind. It’s better to speak out than to live in fear.”