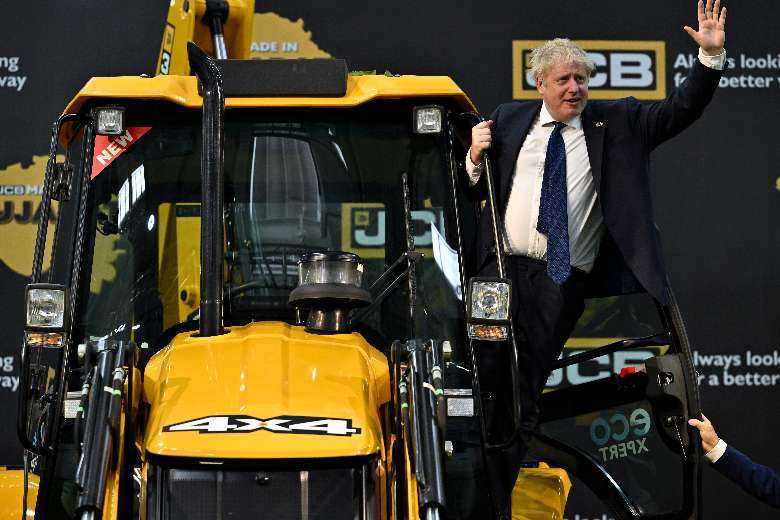 Britain's Prime Minister Boris Johnson waves from a bulldozer during his visit to a JCB factory in Vadodara city in the western Indian state of Gujarat on April 21. (Photo: AFP)

Western leaders visiting India on diplomatic missions often end up making comments that seemingly help the cause of Hindu hardliners while leaving left-liberal and secular people in the lurch.

Donald Trump, then US president, did it, as did Antony Blinken, the handpicked secretary of state of President Joe Biden. “Americans admire Indians’ commitment to rights, democracy and pluralism,” Blinken had said while hailing Indian elections as the “most remarkable” democratic exercise in the world.

Now it is the turn of British Prime Minister Boris Johnson. “India is a very, very different country from autocracies around the world. It is a great, great democracy. It is a stunning, shining fact that 1.35 billion people live under a democracy, and that’s something we should celebrate as it offers us an opportunity for closer cooperation and partnership,” said Johnson while concluding his two-day visit on April 22.

The British PM echoed what his Indian counterpart Narendra Modi and others from the pro-Hindu Bharatiya Janata Party (BJP) like to emphasize from time to time when he said: “I just want to say it is very important to realize that India has constitutional protections for communities — they are part of its constitution.”

The issue is not whether India has a good and/or a strong constitution but whether the democratic freedoms and rights assured in it are being upheld.

Johnson’s rhetoric misses the moot point unknowingly or otherwise. He went a step further, perhaps unintentionally, and jumped into a bulldozer to pose for photographers in Gujarat, Modi’s home state on the western coast.

“Usually the Brits deserve credit for a subtler understanding of India than most Western countries. But this visit to a bulldozer factory by Boris Johnson is stone cold stupid”

Johnson’s diplomatic advisers could have briefed him about how the monster machine equipped with a giant blade had wreaked havoc in a largely Muslim locality in the national capital Delhi, razing their homes and shops to the ground without any mercy or legal notice, as required by Indian law.

“In the backdrop of the Municipal Corporation of Delhi using JCB bulldozers to raze down shops of Muslims in northwest Delhi's Jahangirpuri yesterday [a day prior to Johnson's Gujarat visit], UK prime minister's inauguration of a JCB factory in Gujarat is not only ignorant but his silence on the incident is deafening,” tweeted Amnesty India.

Columnist Sadanand Dhume also took to Twitter: “Usually the Brits deserve credit for a subtler understanding of India than most Western countries. But this visit to a bulldozer factory by Boris Johnson is stone cold stupid.”

A.C. Michael, a Christian rights activist and former member of Delhi Minorities Commission, said: “Bulldozers have become a new weapon in the hands of the people in power completely disregarding the constitution and directives from the country’s highest court.”

The bulldozers were rolled out on the streets of Delhi within a few days of a procession of Hindus carrying sticks and swords to celebrate the birth anniversary of the popular deity Hanuman erupting in violence while passing in front of a mosque in the riot-affected Jahangirpuri area.

Within four days of the riot, the BJP-run North Delhi Municipal Corporation ordered an "anti-encroachment" drive and demolished a number of shops and properties owned by Muslims, even ignoring a Supreme Court order to stop.

It was Yogi Adityanath, the Hindu monk-turned-chief minister of the northern state of Uttar Pradesh, who first used the metaphor of a bulldozer to imply harsh action against those he called “Muslim lawbreakers.”

BJP leaders were quick to latch on to Johnson’s statement, saying it demonstrated how global leaders continue to have trust in Indian democracy while mocking the “anti-Modi, anti-Hindu lobby” of left-liberals and secular people who were let down by the British PM.

“Johnson’s remarks, like those of Trump in the past, only reflect the failure of Western leaders to pinpoint what is wrong with the rights of minorities in India”

Various global think tanks and non-government organizations have slammed the Modi regime from time to time for its poor record of containing discrimination and violence against India’s Muslims and Christians.

However, global leaders like Trump and Johnson seem to develop cold feet when it comes to pinpointing the same during meetings with Modi.

Michael said it was “diplomatic compulsions” that were guiding Western leaders, whether it was a US president or a British prime minister. “Johnson’s remarks, like those of Trump in the past, only reflect the failure of Western leaders to pinpoint what is wrong with the rights of minorities in India,” he said.

Diplomatic and economic strategies cause leaders arriving from Washington, London or Paris to avoid antagonizing image-conscious Modi, the elected leader of 1.37 billion people, or consumers.

India and the US are deep strategic partners in the Indo-Pacific region and the UK is keen to join along with eyeing a free trade pact with New Delhi.

Western powers can ill afford to lose India as a trade and strategic partner even though it may refuse to condemn Russia for invading Ukraine.

It may also be the failure of the left-liberals and secular people, as pointed out by Father M.D. Thomas of the Delhi-based Institute of Harmony and Peace Studies.

“As liberal Indians, we may say Boris Johnson failed us. But we too failed in our campaign against fundamentalism, communalism and rights violations in India in the past several years. It has had little impact on the global stage,” he said.

RAJA MISHRA
The Hindus have risen up against Jihadists and Christian fundamentalists. Please report on how Christians in northeastern India have attacked Hindus. You are welcome to build your churches and practice your religion; we as Hindus respect Christ and his teachings. But don't ally with Jihadists since their time has come. Know who your real enemies are. They are not Hindus.
Reply