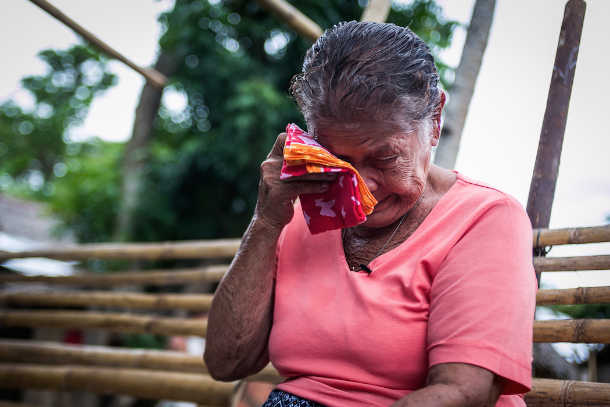 Estelita Mariano, an 80-year old resident of Boracay, worries about where to go after receiving an eviction notice from authorities. (Photo by Mark Saludes)

At the end of an alley, behind a row of bars and eateries on the island of Boracay, is a little community.

In the cluster of huts made of grass live 80-year-old Estelita Mariano and the families of her 14 children who all survive from the tourism industry on the central Philippines island.

Estelita was born on March 14, 1939, in the village of Balabag. She has never left the island and has become witness to its transformation.

When authorities announced early this year that the island would be closed for six months for rehabilitation, Estelita was happy — until she realized what that would mean.

She recalled her childhood when the island was paradise, when only farmers and fishermen, and the natives explored its coves.

"There were only shanties and huts on the shore. There were coconut trees everywhere," Estelita recalled.

Boracay, some 320 kilometers south of Manila, was an unnoticed bliss until former president Ferdinand Marcos declared it a tourist zone and marine reserve in 1978.

The declaration came after the island was featured in a book by travel writer Jens Peter and became a backdrop of American action movies Nam’s Angels and Too Late the Hero.

In the mid-1980s, the island became popular among foreign tourists whose influx invited local migration.

Estelita said business prospered and the natives benefited from it. Her children worked as beach hawkers, tour guides, and resort workers.

Development came at a price. The unregulated entry of businesses and the flood of tourists choked Boracay.

Jerome Maming, who drives visitors around the island, admitted that everything was unorganized. The local government failed to manage the place.

In April, everything stood still. The national government took over and began a crackdown on erring establishments. Several structures were demolished.

The island's rehabilitation, however, is also affecting longtime residents like Estelita. She and her family are being driven away from the only place they know as home.

"Where will we go? We were born here. This is all we got," she said upon receiving a notice of eviction from authorities.

It stated that Estelita and her family are "unlawfully occupying a forestland area."

"The explanations and the documents you have provided failed to convince us that you are entitled to occupy/possess forestland," read the letter.

Estelita is one of 426 families, about 30 percent of whom are original inhabitants of the island, who received eviction orders from the government.

"We have been moving around the island, but this is the first time that they have tried kicking us out," said Estelita, whose family has relocated eight times between 1980 and 2005.

She said they would transfer to a new place every time somebody claimed ownership of the land they were living on.

The woman said her family last transferred about 10 years ago when a hotel was built on the land they were occupying.

"We could not do anything because they presented papers," she said.

The Ati tribal people who live on the periphery of the resorts of Boracay are being displaced by a government rehabilitation project on the island. (Photo by Mark Saludes)

Like Estelita, the Ati tribal people have been on Boracay since before the tourists came. They too have no land titles to prove that they own the land.

According to government records, only about a third of the 1,032-hectare island, or 292 hectares, has owners with title deeds.

Most residents, like Estelita, only possess tax declaration documents as proof of ownership or rights over property.

The authorities have temporarily suspended the implementation of the eviction orders until the government finds a place off the island to relocate the residents.

The priest said that of the 33,100 or so inhabitants of Boracay, more than half are poor.

Father Edwin Gariguez of Caritas Philippines said the government should recognize the rights of the original settlers who are now threatened because of business interests.

"There must be another way to solve this problem without disenfranchising those who have been living here," he said.

The priest suggested an "in-land, on-site relocation project" for inhabitants who have no land titles. He appealed to the government to allocate a piece of land for the people.

"It would be a great gesture of goodwill," he said, adding that, "while we take care of nature, we should also look into the welfare of the people."

Meanwhile, Estelita and her family continue to wait and hope that the government will finally notice the people living behind the stretch of luxury hotel resorts on the island.