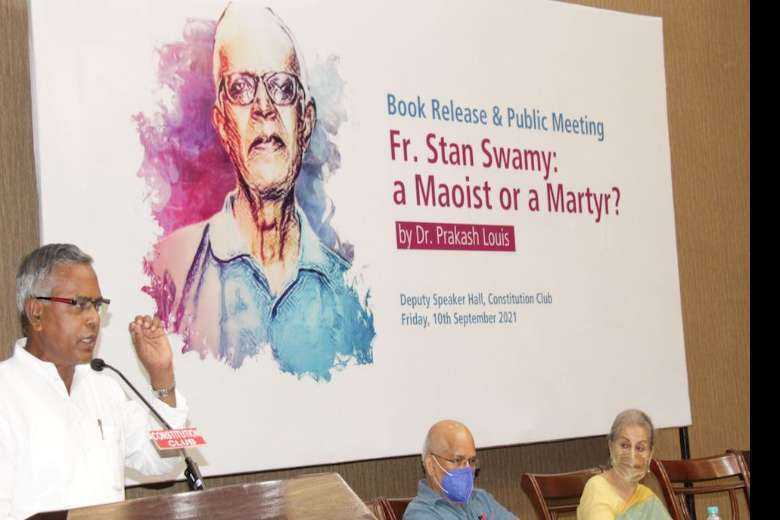 Father Prakash Louis speaks during the launch of ‘Fr. Stan Swamy: A Maoist or a Martyr?’ on Sept. 11 in New Delhi. (Photo: Bijay Kumar Minj/UCA News)

Human rights defenders in India’s national capital have launched a book on Jesuit priest Stan Swamy, who died in July while under detention on sedition charges.

The book, Fr. Stan Swamy: A Maoist or a Martyr?, written by fellow Jesuit Father Prakash Louis, was released on Sept. 10 at a New Delhi launch attended by more than 50 people comprising activists, journalists, politicians, academics, lawyers and members of civil society.

The 266-page book was co-published by Media House of New Delhi and Sahithya Pravarthaka Co-operative Society of Kerala.

The author traces the life and contributions of the veteran social activist, who died at 84 under state custody after being arrested in October last year at his home in Ranchi, Jharkhand state, after being accused of collaborating with outlawed Maoists to overthrow the federal government.

The Jesuit and 15 co-accused were being held under the Unlawful Activities Prevention Act (UAPA).

Father Louis told the launch that the book was required to remember the work and dedication of Father Stan towards the marginalized.

Father Swamy was killed as he was talking about asserting the rights of tribal people and the Pathalgari movement, which became a threat to the state

“I dedicate this book to the tribal people who were the real motivators of Father Swamy, since it is their lives and struggles which inspired him to commit himself to their emancipation," he said.

“I also dedicate this book to all tribal people, social, human rights, political and cultural activists and others like Father Stan who accompany the tribal people, Dalits, minorities and citizens of the most backward caste and class of this country for their rights and dignity.”

Father Louis, former executive director of the Jesuit-run Indian Social Institute, said the book was also dedicated to Father Swamy’s 15 co-accused languishing in jail in the Bhima-Koregaon case who “commit themselves with courage to establish rule of law, democratic values and constitutional principles in this country, which is threatened by fascist, authoritarian, autocratic, undemocratic and anti-people policies and programs.”

The book aims to present facts and figures, arguments and counter-arguments, dates and data to highlight the fact that Father Swamy was a law-abiding, peace-loving and truth-speaking citizen, the priest said.

"Unfortunately, in the present era, demanding enforcement of the Indian constitution, asking for enactment of marginalized-centered laws and resisting adherence to Supreme Court judgements fall under the purview of crimes,” said Gladson Dungdung, a writer and tribal activist who wrote the foreword for the book.

Dungdung said the Indian state perceives the constitutional, legal and traditional rights of tribal people, including the fundamental right to freedom of expression, as terrorist activities.

Virginius Xaxa, a visiting professor at the Institute for Human Development, said Father Swamy felt “a vacuum of leadership” in Jharkhand and Bihar.

“Father Swamy was killed as he was talking about asserting the rights of tribal people and the Pathalgari movement, which became a threat to the state,” Xaxa said.

Jesuits and rights activists say the police fabricated charges and evidence against Father Swamy and other activists to silence them after they criticized the policies of the pro-Hindu Bharatiya Janata Party that runs the federal government.

“Father Swamy will inspire us that we can’t run away from our duties and must raise our voices against injustice,” said MP Abdusamad Samadani.