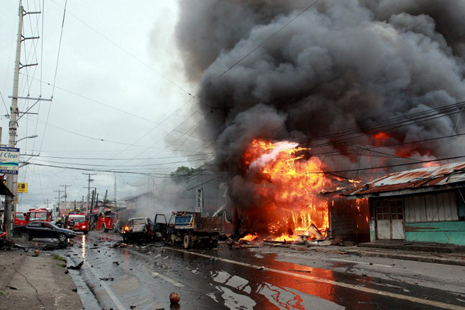 A roadside bombing along a busy street in the southern Philippines city of Cotabato on Monday killed eight people and injured at least 40 others.

The explosion came 10 days after another blast in Cagayan de Oro City which also killed eight people and injured 50.

Monday’s bombing happened as the US State Department this week issued a global travel advisory against potential attacks by the al-Qaeda terror network. Authorities have not commented on whether the two are related.

Governor Mujiv Hataman of the Autonomous Region in Muslim Mindanao said the bomb attack was "ruthless and cowardly."

The victims of the explosion are believed to be Muslims who were preparing to celebrate the end of the Islamic holy month of Ramadan this week.

"We are deeply saddened that this atrocious act happened during this month of Ramadan," Hataman said.

"We call on authorities to conduct a swift and thorough investigation and bring to the bar of justice the criminals."

"Whoever did this deserves the wrath of Allah," said Muhammad Ameen, head of the rebel group's secretariat, adding that he "condemns this kind of barbarism where civilians are deliberately targeted as means to deliver [a] message for an evil agenda." A dirty war with innocents caught in the middle

Lt Col Custodio Parcon, commander of the Marine Battalion Landing Team in the area, said the investigation into the incident was still ongoing. "It is difficult to ascertain the suspects this early," he said.

Military spokesman Lt Col Ramon Zagala said soldiers were deployed in the area to secure and cordon the periphery, and called for calm.

Zainudin Malang, executive director of the Mindanao Human Rights Action Center, said he feels "incredulous" about the situation in the southern Philippines.

"Now I’ve seen it all in this year’s Ramadan, including artillery shelling of civilian homes, people being forced off their land and physically abused, people driven out of their homes by floods," he said.

"I thought a new era of peace was ushered in by all the talk of reforms and peace pacts."