ASEAN leaders warned of growing threat of terrorism, cyber-attacks in the region 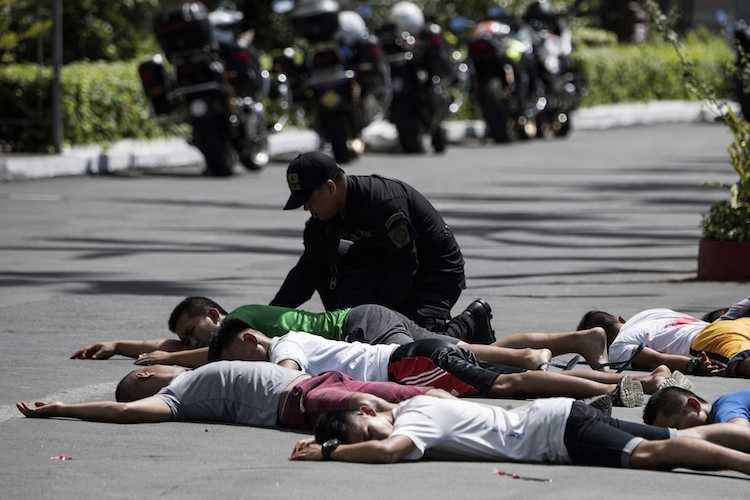 Participants posing as victims lie on the ground after a mock bomb exploded during an anti-terrorism exercise by police in Manila in this April 12 file photo. (Photo by Noel Celis /AFP)

A bomb explosion rocked a Catholic church in the southern Philippines on April 29, a day after Southeast Asian leaders were warned of a "very real" threat of terror attacks in the region.

Philippine authorities blamed the Bangsamoro Islamic Freedom Fighters, which had claimed allegiance to the so-called Islamic State, for the blast that injured two people in the city of Koronadal.

Another explosive device was later found outside a convenience store in the city, three blocks from the St. Anthony Parish cathedral where the first explosion occurred.

"This is a diversionary tactic [of the terrorists] because of a series of arrests we made and military operations against lawless groups," said central Mindanao police chief Marcelo Morales.

"While the explosion caused fear among our people, it should serve as a challenge for us to be more vigilant and work for peace in our community," the priest said.

He appealed to the public "to work and pray for peace," adding that in communities in Mindanao "there are people who really have ill-intentions."

The explosion happened after Sunday Masses while baptism ceremonies were taking place inside the church.

The police said the bomb "bore the signature of an Islamic extremist group."

The day before, Prime Minister Lee Hsien Loong of Singapore warned Southeast Asian leaders at a summit that the region is facing "very real" threats from terrorist and cyber-attacks.

Lee, who is the current chairman of the Association of Southeast Asian Nations (ASEAN), said that despite the defeat of terror groups in some Middle East countries, terrorism remains a threat to the region.

ASEAN comprises 10 Southeast Asian countries and is home to about 640 million people.

In recent years, the region has witnessed a surge in Islamic militancy, especially in countries like the Philippines, Indonesia, and Malaysia.

Threats are real in Indonesia

Indonesian terrorism expert, Ansyaad Mbai, said the threat of cyber-attacks is a reality in Indonesia with a so-called network known as Saracen allegedly behind the spread of hate speech.

Mbai, who use to head Indonesia's National Counterterrorism Agency, said the group aims to sow division especially ahead of upcoming elections.

He said it has become difficult to differentiate radicalism from terrorism, because "terrorist attacks can occur if the political situation shows strong radicalism."

Indonesia has been a target of several cyber-attacks.

Al Chaidar, a terrorism expert from the Malikussaleh University in Aceh, said university students from North Sumatra and West Java already have the capability to steal money through cyber-attacks.

"I believe the situation will be more complicated in the future," he said, adding that groups supporting terrorists might target public facilities.

Security alert in the region

Authorities in several countries have already stepped up security measures.

In Malaysia, the national police chief, Mohamad Fuzi Harun, said they are on high alert especially with national elections on May 9.

"We will make sure everything is under control," he said.

He made the assurance despite an ongoing investigation into the drive-by shooting of a Palestinian national, a member of the militant group Fadi al-Batsh, in Kuala Lumpur on April 21.

The killing came a month after police announced the arrest of seven suspected terrorists, allegedly planning multiple attacks in the country.

The Malaysian police chief said the suspects had been planning to bomb places of worship and abduct security personnel.

Katharina Reny Lestari from Jakarta and Romer Sarmiento from Mindanao contributed to this report.