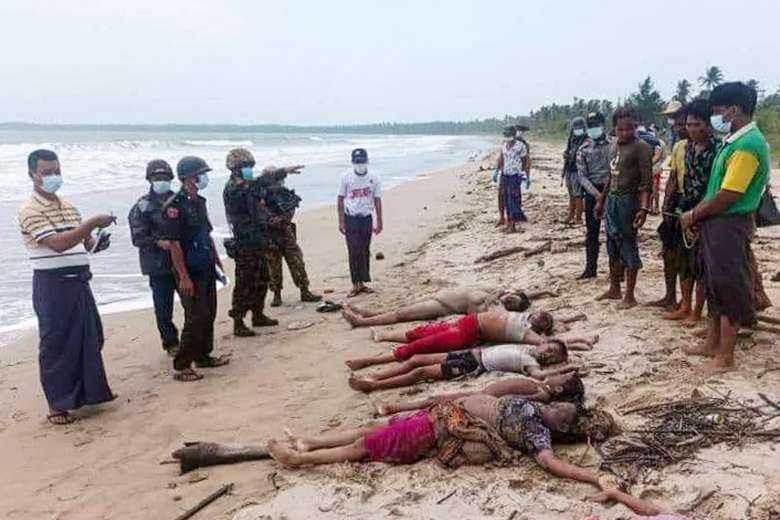 This photo taken on May 22 by an anonymous source shows officials looking at bodies washed up on a beach after a boat carrying at least 90 people capsized near the coast of Pathein township on May 21. (Photo: AFP)

The deaths of at least 17 Rohingya including children in a boat tragedy have highlighted the minority group's ill-treatment at the hands of the military junta in Myanmar.

The boat carrying at least 90 people was on its way to Malaysia across the Bay of Bengal when it sank, according to a Radio Free Asia (RFA) report.

It said more than 50 passengers remain missing and more than 20 survivors, mostly men, have been detained by authorities in Pathein district of Myanmar's Ayeyarwady region.

The boat left Sittwe, capital of western Myanmar's Rakhine state, on May 19 and encountered bad weather off Ayeyarwady, causing it to capsize near the coast of Pathein township on May 21, according to reports.

The passengers were from camps for internally displaced persons (IDPs) in Sittwe, Buthidaung and Maungdaw townships in Rakhine state, according to an RFA report citing local sources.

“The latest tragedy shows once again the sense of desperation being felt by the Rohingya in Myanmar and in the region,” said Indrika Ratwatte, director for Asia and the Pacific at the UN High Commissioner for Refugees.

“It is shocking to see increasing numbers of children, women and men embarking on these dangerous journeys and eventually losing their lives.”

IDPs from the camps near Sittwe said conditions remain miserable as jobs are scarce and they are confined to the camps where freedom of movement is restricted.

“It is a bleak future for them as it is uncertain when they will have a chance to return to their homes despite having stayed there for 10 years,” one Rohingya said.

Over the past decade, thousands of Rohingya refugees have left by sea from Rakhine and from camps in Cox’s Bazar, Bangladesh. The roots of these dangerous journeys are found in Myanmar, where the Rohingya have been stripped of citizenship and denied basic rights.

Refugees are still making perilous journeys by sea, while inside Myanmar about 600,000 Rohingya are still facing discriminatory restrictions imposed by the authorities, deprived of their rights to citizenship, freedom of movement and access to essential services.

Myanmar regards the Rohingya as Bengalis, saying that they are interlopers from neighboring Bangladesh despite most of their ancestors having lived in the country for decades

More than 740,000 Rohingya were forced to flee Rakhine into Bangladesh following a brutal military crackdown in 2017.

The year 2020 was the deadliest on record for refugee journeys in the Bay of Bengal and the Andaman Sea, according to the UN refugee agency.

Myanmar regards the Rohingya as Bengalis, saying that they are interlopers from neighboring Bangladesh despite most of their ancestors having lived in the country for decades.

Myanmar’s junta has faced mounting pressure from the international community over rights abuses against the Rohingya in Rakhine as proceedings against Myanmar and its military leaders are already under way at the International Court of Justice.