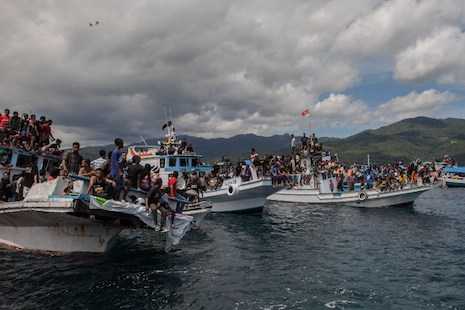 Boats overloaded with Christian pilgrims participate in a sea procession before the disaster on Good Friday (picture: AFP Photo)

Seven pilgrims participating in a traditional sea procession on Good Friday were drowned and four others remain missing after a boat sank off the Sempit Ujung Aro Strait in Larantuka, East Flores district, in East Nusa Tenggara province.

“The dead include three children and four adults,” Sutopo Purwo Nugroho, spokesperson of the National Disaster Management Agency (BPBN), said in a statement on Friday.

Nugroho said overcrowding on the boat and rough seas contributed to the sinking.

“Passengers screamed when the boat began to sink. They jumped into the rough sea,” he said.

Paulus Igo Groda, head of the district’s Disaster Management Agency (BPBD), said that in addition to those who perished, 69 other pilgrims were injured or remain missing.

“The search for the missing people continues today. The rescue team includes police and military personnel. About 34 people are involved in this effort,” Groda told ucanews.com on Saturday.

He added that the search would be conducted for three days. “After that, we will do a review and decide whether we need to continue or stop the search. It depends on the sea situation.”

The sea procession is part of a 500-year-old tradition of Semana Santa (Holy Week), during which the procession carries the Tuan Menino, or infant Jesus statue.

Semana Santa attracts thousands of pilgrims from various faiths each year to Indonesia.