Bloody day in Pakistan as 28 die in attacks

Karachi minister among the injured 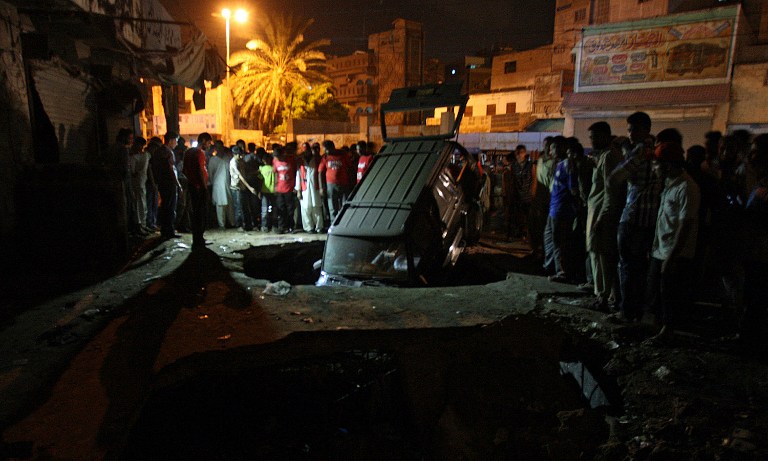 Site of a bomb blast in Karachi, Pakistan on 7 August (AFP photo)

At least 28 people, including senior police and military officials, were killed and dozens of people were wounded in separate bomb and gun attacks across Pakistan at the culmination of the holy month of Ramadan, officials say.

The latest attack happened in Pakistan’s commercial capital Karachi in the early hours of Wednesday.

“At least 11 people have been killed and scores of others, provincial minister Javed Naghori among them, injured when a remote-controlled bomb went off during a soccer match in Lyari area of the metropolitan city,” Information Minister Sharjeel Memon confirmed.

The victims were mostly young children, aged between 6 and 15, and it is feared the death toll could mount.

The bomb was hidden inside a motorcycle parked close to the soccer ground. It was detonated when the minister was leaving the area after watching the match. Nobody has yet claimed the attack, but the minister appeared to be the target of blast.

Elsewhere in Pakistan yesterday, 17 people, including senior police and military officials, were killed in gun attacks.

In the first attack, suspected Baloch insurgents abducted 13 bus passengers and shot them dead in the mountainous area of Balon district, some 80 kilometers from Quetta, the provincial capital of Balochistan province. A paramilitary frontier corps personnel was also killed when he tried to stop the attackers.

The victims, all from Punjab province, were heading to their homes to celebrate the Muslim festival of Eid with their families.

Abdul Waheed Shah, deputy commissioner of Bolan, told journalists that the attackers, numbered between 150 and 200, stopped four buses and checked the national identity cards of passengers before pulling them off the vehicles.

In another attack, three senior policemen were killed when Taliban militants ambushed their vehicle in Chilas town of Gilgit Baltistan region.

Barjees Tahir, federal minister for Kashmir Affairs and Gilgit Baltistan, said Senior Police Superintendent Hilal Ahmed, Colonel Ghulam Mustafa and Captain Ashfaq Aziz were targeted as they were involved in a probe into the killings of foreign mountaineers in Diamer valley last month.

Tehreek-e-Taliban Pakistan has claimed responsibility for the attack, saying the killing was aimed at diverting the world’s attention towards drone strikes. AFP