In June 4 lead up, Chinese authorities arrange for certain bloggers to take 'vacations' as US urges transparency on deaths 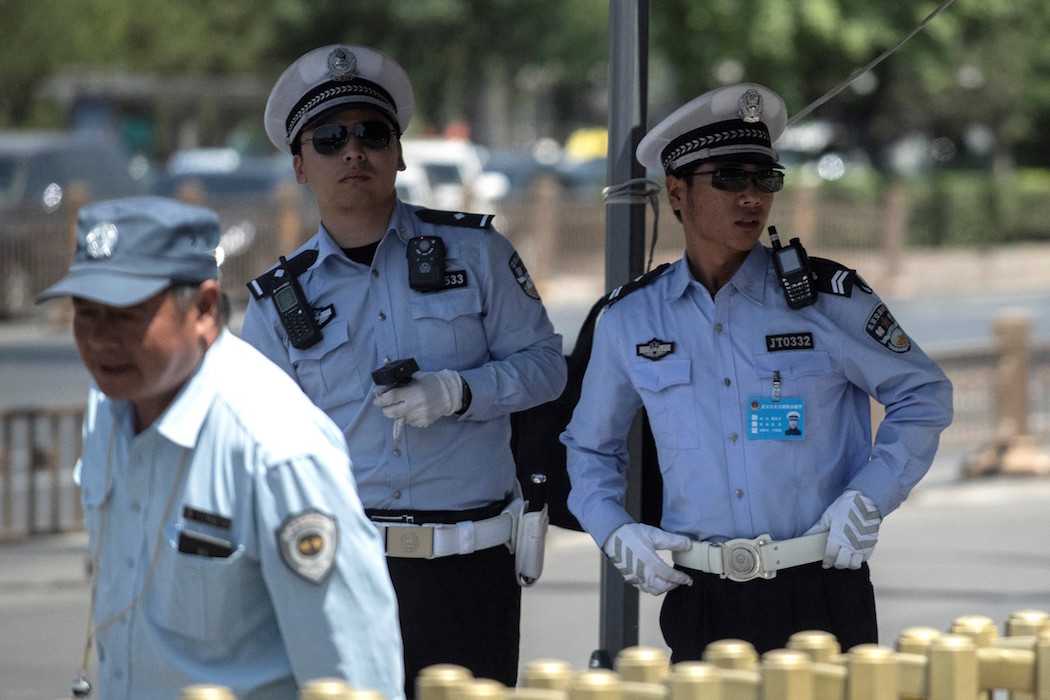 Chinese police stand guard near Tiananmen Square on the anniversary of the 1989 crackdown on democracy protestors, in Beijing on June 4, 2018. Open discussion of the crackdown is forbidden in China, where hundreds — by some estimates more than a thousand — died when the Communist Party sent tanks to crush demonstrations in the square in Beijing on June 4 1989, after student-led protesters had staged a peaceful seven-week sit-in to demand democratic reforms. (Photo by Fred Dufour/AFP)

Several Chinese bloggers have gone missing or are on forced 'vacation' ahead of the 29th anniversary of the Tiananmen Square massacre that resulted in widespread international condemnation.

And organizers of an annual candlelight vigil in Hong Kong are still calling for an end to one-party communist rule on the mainland despite a risk of official retribution.

According to a June 4 media release from Reporters Without Borders, Chinese authorities had been arranging for certain bloggers to take 'vacations' under police escort before this year's anniversary of that day in 1989.

A similar wave of disappearances occurs each year in the run-up to the heavily censored anniversary of the event in which more 1,000 people were killed, the media-freedom organization said.

Reporters Without Borders reported that Hu Jia, who was awarded its Press Freedom Prize in 2007 and the Sakharov Prize in 2008, was told he would be "under soft detention" in Hebei province from June 1 to 5.

He Depu, a political commentator, was informed that he should take a trip to an unknown destination on June 3.

Cha Jianguo, who wrote for the Chinese arm of PEN International, a writers' association, was reportedly put under house arrest on May 28 after turning down a so-called vacation offer.

Cedric Alviani, head of the East Asia desk of Reporters Without Borders, called for an end to such abuses preventing foreign journalists from contacting bloggers as sources for stories on Tiananmen anniversaries.

Mike Pompeo, the United States Secretary of State, issued a statement on June 3 recalling the "tragic loss" of innocent lives.

The U.S. also urged the Chinese government to publicly account for those killed, detained or still missing and to release those who have been jailed for striving to keep the memory of Tiananmen Square alive.

Further, the U.S. called for an end to harassment of demonstrators and their families as well as for universal rights and fundamental freedoms to be afforded to all Chinese citizens. Meanwhile, in Hong Kong, this year's candlelight June 4 vigil at Victoria Park planned to proceed with a call for an end to one-party rule in China, despite a prohibition on doing so.

Activist Chow Hang-tung from the Hong Kong Alliance in Support of Patriotic Democratic Movements told the South China Morning Post that campaigners would not stop speaking out.

"We must at least dare to stand up and shout, 'we want to end one-party dictatorship'," she said.

Albert Ho Chun-yan, chairman of the alliance, stated that he and others would not be intimidated as Hong Kong people had an absolute right to freedom of speech.

He did not make a prediction on how many people would attended the vigil, but noted that tens of thousands had participated in the past and there was no reason to believe the number would drop significantly.

A procession held by the Alliance on May 27 to a government liaison office in Hong Kong was only attended by about 1,100 people.

Some college representatives believe Hong Kong has no obligation to promote democracy on the mainland, but should nonetheless condemn Chinese Communist Party brutality.