Using his own experience of discrimination, Sabir Michael feels it is his duty to help minorities 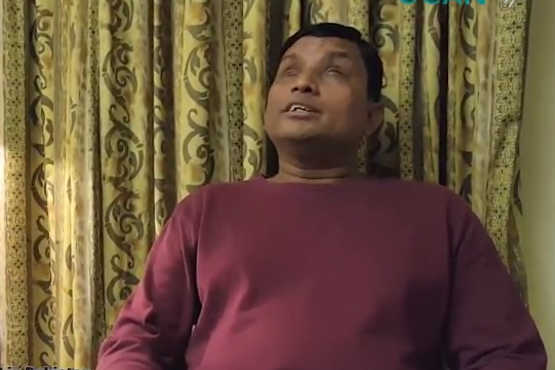 As part of his PhD degree, Sabir Michael completed a thesis on the socioeconomic problems of Christians and Hindus in Karachi. (YouTube screengrab/ucanews.com)

Sabir Michael was blind at birth but it did not stop him from becoming the first and only visually impaired Christian in Pakistan to complete a PhD degree.

"My thesis on the socioeconomic problems of Christians and Hindus in Karachi became my mission. Both communities are generally poor and face the same discrimination. It was important to document and understand the phenomenon I faced myself and move forward," Michael, a lay Dominican told ucanews.com.

Lay Dominicans live in the world as married or single persons following a rule based on the spirit of St. Dominic and share in the spiritual benefits and mission of the Dominican Order.

"The situation of human rights is worsening in the country. The constitution itself makes us a second-class system. Perhaps there is an undisclosed state policy to keep religious minorities at a certain level and ignore their development. Even in the 21st century, their utensils are kept separate," he said. "Extremist groups target our communities when the world reacts against Muslims."

Michael, 40, teaches in the social work department of Karachi University and is a member of the Human Rights Commission of Pakistan, Pakistani Bishops' National Commission for Justice and Peace and the Social Welfare Council in Sindh province.

He is heading two NGOs, one of which works for the rights of vulnerable sections of society including women, children, minorities and the disabled. In 2016, he became part of the USAID/Pakistan Alumni Association.

All of this could not have been possible without the support of the Catholic Church, especially as his father was a poor sanitary worker before retiring three years ago.

"Two of my siblings are also blind but they are also completing their studies. A British Daughters of the Heart of Mary novitiate spotted me when I was seven and sent me to a home for the blind run by an Italian priest in Okara, a city in Punjab," said Michael.

Michael was among more than 50 blind students from all over the country.

"In grade seven, I decided to become very different and more qualified than others. Benazir Bhutto and Nelson Mandela are my ideals in human rights and social justice. It was my hobby to translate their speeches. I used to ask my friends to read books for me. The priest and some of my Muslim friends even sponsored my doctorate. Church people prepared me for the struggle in society," he said.

Michael claims he had to face discrimination on multiple grounds.

"It is my considered opinion that Islami Jamiat Taleba, a students' organization, opposed my admission to Lahore University despite a quota for the blind," he said.

"I was a Christian, blind and an outspoken activist. I had to return to the southern port city of Karachi, where I faced ethnic discrimination as a Punjabi. The job in the university was only possible after combined pressure from civil society and a political party. It was a painful experience.

"Officials decide what the blind can do or cannot do despite passing all tests. Braille books are costly and in short supply. We have mobility issues due to broken footpaths and the absence of ramps. Families usually hide a blind member due to social stigma. We don't need sympathy but empathy."

In 2014, the Punjab government raised the job quota for visually impaired people from 2 percent to 3 percent. However, the All Punjab Blind Association claims the new quota is hardly implemented.

"The quota, an ordinance, is voluntary in the private sector. They are allowed to ignore it altogether and hand over the reserved salaries to the government, which can spend it on the welfare of the visually impaired. Such loopholes further discourage us," said Michael.

Despite all the challenges, he feels bound to serve minorities, especially after meeting St. Pope John Paul II in 2000 in Rome. "God will bless you — just don't leave Pakistan," he quoted the pope as saying.

Besides defending human rights, Michael leads the choir at St. Paul Church and helped his parish priest in forming the St. Dominic chapter in 2002 in Karachi. His group provides Bible classes to group members, prepares laity to become Eucharistic ministers, conducts prayer visits and holds prayers for the sick in 18 parishes of the southern archdiocese.

The father of three is also a volunteer guest speaker at the National Catholic Institute of Theology, where he helps students in their research.

"I am financing the schooling of 10 students. My sight can never be recovered but I feel duty-bound to serve the church and use my skills to work for change in society," he said.

Father Mario Rodrigues, rector of St. Patrick's Cathedral, thanked Michael for his technical assistance as a motivator. "He used his disabilities as stepping stones and became an example for those who do nothing in difficult circumstances," he said.